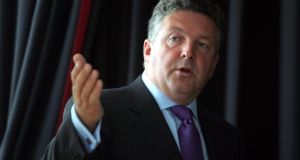 Brian O’Cathain of Petroceltic: the Dublin-based oil and gas exploration company is still in the sights of Dragon Oil, which aborted a £500 million bid for it in December. Photograph: Eric Luke

Petroceltic International, the Dublin-based oil and gas company embroiled in a bitter row with its biggest shareholder, Worldview Capital, is still in the sights of Dragon Oil, which aborted a £500 million bid for Petroceltic in December.

Dragon Oil’s chief executive, Abdul Jaleel Al Khalifa, told analysts on Tuesday that it is still “open to opportunities including Petroceltic”, although he hinted it would be at a lower price following the recent collapse in the price of oil.

Petroceltic’s 28 per cent shareholder, Worldview, told The Irish Times it is “surprised” at speculation of a renewed bid by Dragon, which could make another offer as early as next month with the imprimatur of Petroceltic’s board.

“The company is unsaleable with its current management and strategy in place,” Worldview claimed on Tuesday.

Dragon, however, was reported in Britain to have said on Tuesday it “likes” Petroceltic’s current management team, led by chief executive Brian O’Cathain.

The confirmation of renewed interest by Dragon comes ahead of an extraordinary general meeting (egm) of Petroceltic later this month.

Worldview, which called the egm, alleges management is “destroying shareholder value” and has called votes to unseat Mr O’Cathain and install new board members. Petroceltic’s board has backed Mr O’Cathain and has proposed separate new board appointments.

“Anybody we have spoken to has offered us no criticism [of its strategy to unseat Mr O’Cathain and develop a new production schedule],” said Worldview.

Mr O’Cathain has said he fears the activist shareholder Worldview wants to “break up” Petroceltic to release value from its Algerian and Egyptian assets, but Mr Ischenko said this was “preposterous”.

“Our mandate is not to control companies. We give investors exposure to cheap assets,” said Mr Ischenko.

Mr O’Cathain last week told The Irish Times that h is still prepared to sit down with Worldview to hammer out a compromise, but complained “they won’t take my calls”.

Mr Ischenko said there was no prospect of a compromise before the egm: “We have reached the point of no return. We will only meet Brian [O’Cathain] if it is to tell us he is stepping down.”

“It is only a matter of time. If not this egm, then the next egm. There will be more of them. We will remove any directors [that the existing board successfully] puts in.”

Worldview repeated its claim that Petroceltic will “run out of cash” this year, which Petroceltic has denied, and has said it will block any fund raising.

“The company is putting capital into declining assets and it needs to get rid of assets with no future,” said Mr Ischenko, who described Petroceltic as a “dying patient”.

Petroceltic said on Tuesday it had received the backing of three leading shareholder advisory groups in its row with Worldview, two of which specifically backed Mr O’Cathain.

Worldview and Petroceltic are also headed for a court battle in Britain over an allegation by the activist investor that Petrceltic reneged on commitments given to it as part of a deal last year. Petroceltic has denied these accusations.

Petroceltic said: “It’s patently false to suggest the company is unsaleable. We believe Worldview’s attempt to take control of Petroceltic risks serious damage to the our North African assets.”