Case arose after the developer got planning permission for the structures, but their built height had been varied 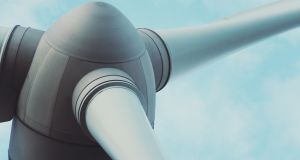 A Waterford wind farm operator has been ordered by the High Court to put nine turbines into “standby” mode from Monday following a finding they breach an EU directive on environmental impact assessments.

Mr Justice Garrett Simons said he wished to give Barranafaddock Sustainability Electricity, operators of wind farm at Ballyduff, an opportunity to regularise the planning status of the turbines so that they comply with EU law. He would not, therefore, order their immediate removal.

He put a stay on the making of his order for a week from Monday during which time the developer could apply to the Court of Appeal for an early hearing of its appeal over his decision. The developer also has liberty to apply to vacate the order if An Bord Pleanala makes a decision effectively approving permission.

The case arose after the developer got planning permission for the structures, but their built height had been varied, which objectors claimed meant they were not in accordance with planning approval.

The developer maintained the deviation of the rotor height from 90 metres to 103m was immaterial in terms of the planning permission. The matter was referred by Waterford City and Co Council for determination to An Bord Pleanála which refused to declare the modifications to the turbines was exempted development.

The developer brought proceedings, currently before the court, over the board’s decision. Separately, seven local residents had sought a planning injunction from the court in relation to the status of the turbines as built.

On Friday, Mr Justice Simons said the developer was precluded by law from re-agitating the argument that he as built turbines are authorised by a 2011 planning permission. The developer had a full opportunity to make its case before the board and it did not challenge the decision they were not exempt under Section 5 of the Planning and Development Act 2000, he said.

The developer could not, therefore, reopen the board’s findings in the High Court proceedings. “The 2011 permission did not authorise the erection of of wind turbines of the scale and dimensions actually put up,” he said.

The permission for the turbines was subject to an EU directive requiring an environmental impact assessment, he said.. The increase in the diameter of the rotor blades constituted a change or extension to the permitted development, he said. The directive obliges member states to provide effective, proportionate and dissuasive penalties for breaches of national legislation, he said.

It could only have been lawfully authorised by way of making an application for permission and the developer was not entitled to rely on an alleged agreement with the local council authorising the extension/change, he held.