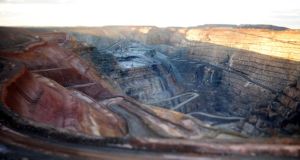 Mining trucks and machinery operate in the Fimiston Open Pit, known as the Super Pit, in this photograph taken with a tilt-shift lens in Kalgoorlie, Australia. Photographer: Carla Gottgens/Bloomberg

For two decades, Australia has deserved its reputation as a “lucky country”.

Alone in the developed world, since 1991 it has been recession-free.

It admirably weathered the global financial crisis thanks to a sound financial system and a made-in-China mining boom that has turbocharged the economy.

As well as massive coal and iron ore deposits, it has huge reserves of natural gas ready to liquefy and ship to energy-starved Japan and South Korea.

The term “lucky country”, however, has an addendum. Coined by writer and social critic Donald Horne in 1964, the full phrase is less breezily optimistic.

“Australia is a lucky country, run by second-rate people who share its luck.”

Next month’s general election, in which voters must choose which of two flawed politicians should steer them through the choppier economic waters ahead, will test Horne’s aphorism to its limits.

Both Kevin Rudd, the now-you-see-him-now-you-don’t prime minister, and Tony Abbott, head of the Liberal Party-led coalition, are flawed in their own way.

Whichever of them wins will have a tricky job in managing the transition from what Rudd calls “the end of the China resources boom”.

Rudd is fiercely intelligent, a Mandarin speaker with a good grasp of the forces shaping a nation whose main security partner is the US but whose principal trading partner is China.

He can, however, be a lousy politician, and is loathed by many in his own party for his highhandedness.

Gillard ousting
When he ousted Julia Gillard to reclaim the leadership at the third attempt in June, much of the cabinet refused to serve under him.

Dislike of Rudd’s style has dogged the Australian Labor Party ever since the “Ruddslide” of 2007 that ended 11 years of coalition dominance under John Howard.

In 2010, having lost the support of the union-dominated parliamentary Labor Party, Rudd was ousted in a putsch and replaced by the more likeable, if less effective, Gillard.

Vicious infighting has rendered the ALP government a shambles when it should have been reaping the benefits of the most extraordinary mining bonanza in 100 years.

Step forward, Abbott. While his Liberal Party, with its fiscally cautious platform, is now more trusted by Australians to govern the country, Abbott himself is not.

A former Rhodes scholar who trained briefly for the priesthood, he is a social conservative with a bully-boy reputation.

Gillard laid into him for his views on women and abortion and his association with a “ditch the witch” campaign against her.

He has sought to soften his hard-man image. Yet he struggles to jettison his reputation for being what journalist David Marr calls “one of the great head-kickers of Australian politics”.

According to the latest survey from Newspoll, Abbott’s personal support rating is minus 22, putting him 13 points behind Rudd, who is also in negative territory.

That, then, is the voters’ choice: an unlikeable narcissist versus an unpopular misogynist. Given the ALP’s mixed record in office, the odds must be that Abbott’s Liberal-National coalition will prevail even though, since Rudd’s return, Labor has closed the gap.

Whoever wins will not have it easy. Economic fundamentals have deteriorated more sharply than expected, thanks to sharply falling commodity prices.

Last week the government was forced to scrap its three-month-old budget estimates, edging down its growth forecast for the fiscal year to 2.5 per cent and lowering its revenue projection over the next four years by a total of A$33bn (US$29.7bn). The Reserve Bank of Australia has responded by cutting its benchmark rate to a record low of 2.5 per cent.

Non-resource parts of the economy have fared badly in recent years, as the mining boom pushed the Australian dollar above parity with the greenback.

That, together with higher wages, has priced some manufacturers out of business. Ford is pulling out. The services sector, which accounts for three-quarters of output, has also struggled. Tourists and foreign students alike have been discouraged by high prices.

Currency fall
Some of those effects will now reverse as the currency weakens, fulfilling what Glenn Stevens, RBA governor, calls its “normal role as a shock absorber”. The currency has already fallen 15 per cent since the start of April. It is not clear, though, whether that will be enough.

It is easier to close a factory than to open one. True, commodity exports, especially of gas, will continue to rise as new production comes on stream. But resource investment – 8 per cent of output against a 50-year average of 2 per cent – will fall sharply.

Overleveraged consumers will not easily take up the slack. Australia could be in for its trickiest economic spell in a generation.

Economic shift
Whoever wins next month may have only crude tools to counter what is a structural economic shift. One thing is striking. After a 20-year run, you would have thought politicians would have prepared for this day better.

There has been sporadic talk of building up a rainy-day fund or establishing a sovereign wealth fund with windfall mining profits. In that sense, Rudd’s “supertax” was on the right lines, though it came too late and was poorly executed.

That leaves Australia more vulnerable to a downturn than it need be. As growth slows, it must hope that a falling dollar does the trick by breathing fresh life into other parts of the economy.

Compared with fellow advanced economies, Australia still looks pretty blessed. The next prime minister, though, must hope the luck doesn’t run out quite yet. – (Copyright The Financial Times Limited 2013)