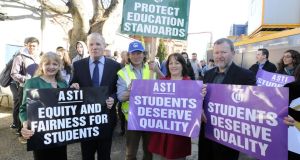 Figures from the Central Statistics Office (CSO) show 44,105 days were lost to industrial disputes in 2014 compared to just 14,965 the previous year.

In total, there were 11 disputes last year involving 31,665 workers and 11 employers, whereas only 11,924 workers and 12 employers were involved in industrial disputes in 2013.

Two disputes in the education section accounted for 54 per cent of the days lost last year.

A one-day strike by the teachers’ unions ASTI and TUI in December, centred on proposed changes to the Junior Cert cycle, closed more than 730 post-primary schools, affecting more than 330,000 students. This dispute accounted for a total of 23,500 days lost last year.

In February, staff at the Tyndall National Institute in Cork also staged a series of one-day stoppages over pay and conditions, which they claimed should be on a parity with staff at University College C ork, where the institute is located.

The CSO figures show there were three high-profile disputes in progress in the final quarter of 2014, involving 27,092 workers and three employers.

In October, workers at JJ Rhatigan picketed construction sites over the company’s use of subcontractors rather than the traditional practice of using directly employed labour.

During the same period, workers at Greyhound were involved in a dispute with management over proposed pay cuts.

According to the CSO, one industrial dispute began in the fourth quarter and two disputes carried over from the third quarter.

Disputes are included in the CSO’s report if they involve a stoppage of work lasting for at least one day and the total time lost is 10 or more person-days.