Why is Ireland now more expensive than Germany?

Ireland is one of the most expensive countries in the EU, only exceeded by Denmark. 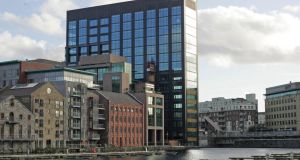 Ireland is now one of the most expensive countries in the EU, up there with the UK and Sweden, and only exceeded by Denmark. Photograph: Eric Luke/The Irish Times

While the popular perception is that the cost of living is always rising, since the beginning of the year consumer prices have on average been lower than last year.

In the latest data for July, food, drink, clothing and transport are all cheaper than at the same time last year while, on the other hand, the cost of hotels and restaurants, education and housing has gone up. Falling petrol prices have lowered the cost of transport, but car insurance increases on the way will to some extent counterbalance that.

Whether you perceive prices to be falling or rising depends on the basket of goods and services you consume, which may differ from the average. A cyclist who eats out a lot won’t benefit from falling petrol prices and will face higher costs for meals. A couple whose family are reared and whose mortgage is paid off won’t be bothered by increases in the price of housing or education.

However, as anyone who travels knows, Ireland is generally an expensive place to live. Years ago, it was Germany that was notoriously expensive. I recall a holiday in the 1970s where we travelled by train from Belgium through Germany to Austria on a student budget. We survived the journey on Belgian sandwiches so we wouldn’t have to spend anything in Germany.

Comparing price levels across countries is no simple matter. Because consumers in different countries have different preferences, it is not easy to define an appropriate basket of goods and services. The price of pasta is more important in Italy; in other countries it may be the price of potatoes.

Whatever the problems of collecting the data, Eurostat publishes regular price comparisons, which are broadly representative. Germany is no longer the expensive country of the 1970s; in 2014 their price level was 84 per cent of that in Ireland (see graph). Ireland is now one of the most expensive countries in the EU, up there with the UK and Sweden, and only exceeded by Denmark. Most other countries in the EU are at least 10 per cent cheaper than Ireland.

From detailed price comparison data across the EU available for 2011 for different components of consumer spending, we can look at some of the areas where Ireland’s and Germany’s prices differ. An OECD Purchasing Power Parity Benchmark table, which shows the German price level as a percentage of the Irish level, indicates that Ireland in 2011 was more expensive than Germany for all goods and services with the exception of meat. 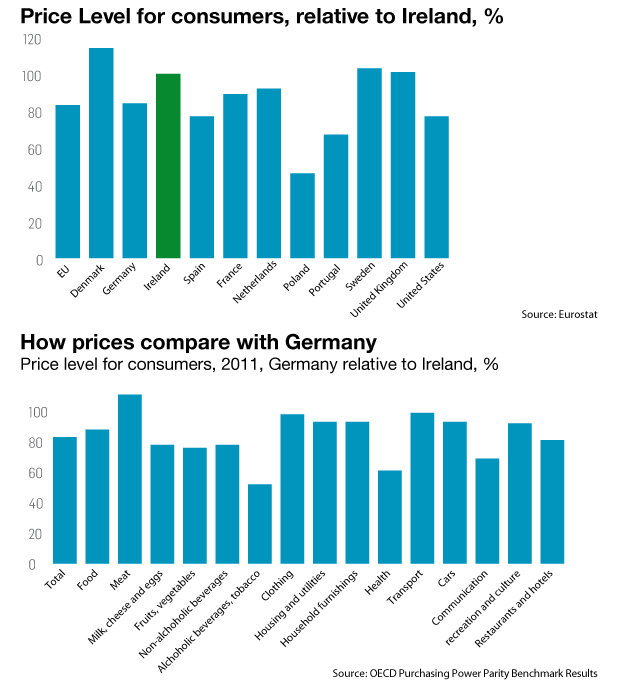 While higher VAT and excise tax rates in Ireland would account for some of the difference for non-food items, it doesn’t explain why food, such as fruit and dairy products, was more expensive in Ireland.

Health costs show a big difference between the two countries, but are not really comparable because higher taxes in Germany fund elements of healthcare there that in Ireland are largely paid out of pocket by consumers. Communications, ie phone bills, were another major area of divergence between prices here and in Germany.

There is no single factor which explains why Ireland is more expensive than Germany but competition undoubtedly matters. Germany had the benefit of a number of financially strong companies competing for business in the telecommunications sector.

In the case of clothing, the similarity in prices between Ireland and Germany probably owes much to tough competition between Penneys and Dunnes, and more recent arrivals such as H&M and Zara. Twenty years ago the retail margin in Ireland for clothing was 25 per cent whereas in France it was 40 per cent.

It was not that Ireland was much more efficient. Rather, there was a difference in tastes – in Ireland people were prepared to dress out of Dunnes whereas in France people preferred a more unique product sourced in expensive small shops. Irish preferences combined well with a more competitive mass marketing of clothes and we benefit, as a result, from competitive prices, if not from “unique” designs.

In the case of groceries, Ireland probably suffers from being a rather remote sub-sector of the UK market. Across Northern Europe in the 1990s the grocery trade saw major changes, with supermarkets moving to centralised distribution. This means that everything sold in an individual supermarket comes from a single centralised warehouse serving an enormous catchment area that ignores borders. Suppliers make one delivery to the warehouse and this saves on multiple deliveries to individual supermarkets. This can knock between 2 and 5 per cent off the cost of groceries.

In Ireland, by contrast, partly because of its island status, it is difficult to benefit from the scale economies possible elsewhere in the EU.

Over the last decade the German discounters Lidl and Aldi have increased their penetration into the Irish supermarket sector, and have probably helped narrow the difference in food prices between Ireland and Germany. However, Ireland still remains part of a high-price British Isles market.

Any further increase in competition in the supermarket sector is only likely if one of the other major Continental chains were to enter the Irish market. However, new entry, and hence lower prices, is only likely if the planning laws are developed to facilitate such a change.