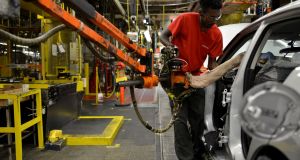 The US jobless rate was unchanged in March at 3.8%, while average hourly earnings increased 3.2% from the prior year

The US jobs market has sprang back, alleviating some concern about a deeper downturn.

Wage gains eased, reinforcing the Federal Reserve’s message that interest rates are on hold, while the payrolls figures indicate February’s weakness was an anomaly.

“This report was welcome evidence that the economy is not falling off a cliff; there’s not a recession coming. This is the kind of report that we needed after such an eye-popping number in February,” said Ellen Zentner, chief US economist at Morgan Stanley. “I would call this a normalisation after very volatile numbers in the first part of the year.”

The report aligns with Fed officials’ views that while the job market remains tight, global growth concerns weigh on the outlook and inflation is still subdued. Despite signs of recent weakness in manufacturing and retail sales, and reduced labour force participation, the report shows the economy is broadly intact.

Payrolls rose 196,000 after a 33,000 advance in February, Friday’s Labour Department report showed, topping the 177,000 forecast in a Bloomberg’s survey and boosting the February tally from an initially reported 20,000 gain.

The jobless rate was unchanged at 3.8 per cent, while average hourly earnings increased 3.2 per cent from the prior year, missing all estimates and down from the best pace of the expansion.

Still, that leaves the Fed in an ideal position, according to Anwiti Bahuguna, senior portfolio manager at Columbia Threadneedle Investments.

“Job growth is not so strong that one starts wondering if there’ll be inflationary pressure,” and not weak enough to signal a far more significant slowdown, she said by phone. “It’s neither worrisome from a recession point of view, nor from an inflationary point of view.” – Bloomberg

1 Moving in and out of lockdown is a recipe for economic disaster
2 Objectors stall production of enough timber for 5,000 houses
3 Shed Distillery in Leitrim to open €3m visitor centre next month
4 Revised help-to-buy scheme opens for applications
5 Urban micro-farm growing vegetables in heart of community
6 Glanbia sees sharp decline in earnings due to Covid-19 crisis
7 ‘No demand... because there are no people’ at well-known Dublin pub
8 AIB concedes Covid mortgage policy was ‘regrettable’
9 IMRO speeds up royalty payments to Covid-hit musicians
10 Buying a second home now that we work from home
Real news has value SUBSCRIBE