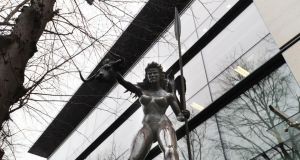 Nearly two-thirds of a portfolio of mortgages being sold by the liquidators of IBRC has been purchased by two US hedge funds.

The Project Sand tranche of loans, which have a balance of about €1.8 billion, are mostly residential mortgages that originated with Irish Nationwide. Half of the mortgages are in arrears.

In a statement today, liquidators KPMG said 64 per cent of the loans had been sold to US funds Lone Star and Oaktree Capital.

It had been speculated that the loans would sold at a discount but the sales price was not disclosed.

Liquidators Kieran Wallace and Eamonn Richardson said, however, the buyers had agreed to abide by a code of conduct when dealing with mortgage arrears.

They said they would now begin communicating with loan and mortgage customers to inform them of the outcome of the sales process directly.

The liquidators also announced that 85 per cent of its largest portfolio of real estate loans - known as Project Stone - has also been sold.

Again, the price was not disclosed.

The conclusion of these sales meant €19.8 billion of loans out of a total book of €21.7 billion have now been sold.

“The sales process for the IBRC loans, including their segmentation to meet demand from international buyers, has delivered a very positive result with over 90 per cent of IBRC’s loan assets now sold within 14 months of the Bank’s liquidation,” the liquidators said.

“The response of markets to the liquidation and sales process has exceeded our expectations,” they added.

Minister for Finance Michael Noonan welcomed the announcement, saying “the success of these sales processes” represented a significant milestone for the State.

“This is a hugely successful outcome for the special liquidators which provides further strong confirmation of the renewed confidence of international investors in the Irish economy and its future prospects,” he said.

1 Pilita Clark: Working from home is starting to pall
2 Owner of Dundrum Town Centre to sell prized assets
3 Can a first-time buyer get relief on a buy-to-let home?
4 Thousands back petition demanding State aid for Aer Lingus
5 Microsoft to press on with TikTok deal talks after call with Trump
6 Over half of Ireland’s businesses in decline following Covid-19 lockdowns
7 Seán Quinn children demand share of lost business
8 HSBC warns loan losses could hit $13bn as profit plunges 65%
9 ‘I think cash is a thing of the past’
10 Law governing construction pay rates remains pending State appeal
Real news has value SUBSCRIBE