US firms push for tax breaks on Irish share options 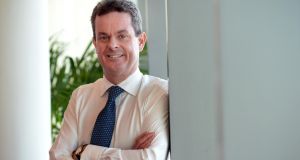 US multinationals here are pressing the Government to reduce the tax due on share options awarded to company executives in the upcoming budget, in order to boost foreign investment.

The American Chamber of Commerce in Ireland, which represents employers such as Google and Intel, has told the Department of Finance that “senior leaders in our member companies are deeply concerned” about Irish tax levels.

“[They] are uniformly of the view that reforms can be made within the income tax code to improve the current competitive position,” said the chamber last week in a submission to the department, provided to The Irish Times.

Feargal O’Rourke, the managing partner of PricewaterhouseCoopers (PwC) and a board member of the chamber and tax adviser to many of its members, said the drive for share option tax cuts would also form a central plank of its formal budget submission.

The Government is coming under increasing pressure to sharpen the incentives for foreign investment into Ireland following the Brexit vote and the subsequent pledge by the UK government that it will slash corporation tax.

The chamber told the department that changes to the taxation of share option schemes, along with other changes to the income tax code, would “significantly enhance” Ireland’s offering to foreign investors.

The chamber warned that the 12.5 per cent corporation tax rate is “by no means sufficient” in ensuring the protection of investment flows.

Incentivised share option schemes are a favoured method for US multinationals and major listed companies to reward senior executives.

Multinationals, as well as smaller companies in the tech industry and other sectors, also routinely grant cheap share options to lower-ranked staff.

This means that, for top earners, they are hit with a tax bill of 52 per cent on the discount given on the share value.

In practice, this means that they usually sell some of the shares as soon as they get them, in order to pay the tax bill.

The lower capital gains tax (CGT) rate of 33 per cent applies to these approved schemes, but only when the shares are sold and not as soon as they are awarded.

However, US multinationals usually operate conventional corporate share option schemes that fall outside of the Revenue approved schemes, especially for top executives.

The chamber has made four separate suggestions to the Government on the issue.

Firstly, it said the State should change the rules from income tax rates on acquisition to the CGT rate on disposal for all share payments.

Failing this, it said, PRSI and Universal Social Charge should not be paid on non-approved share awards.

In a statement yesterday, the chamber said “if Ireland is to remain ahead of the pack” it must position itself “as the global location of choice” for talent.

“The high level of the personal tax in Ireland has been raised as a concern, and reform in this area would make Ireland more attractive location for talented people to locate,” it said.