US economy now growing at annual rate of 3.2% 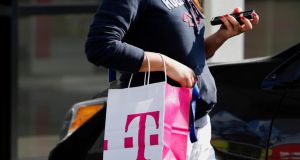 A customer carries a T-Mobile US shopping bag after leaving a retail store in Torrance, California. Photographer: Patrick T. Fallon/Bloomberg

The US economy expanded at a 3.2 per cent pace in the fourth quarter as Americans’ spending climbed the most in three years.

The growth in gross domestic product, which was largely in line with forecasts, and followed a 4.1 per cent advance in the prior three months, the US commerce department figures showed today in Washington.

Growth in the second half of the year was the strongest since the six months ended in March 2012. Consumer spending, which accounts for almost 70 percent of the economy, climbed 3.3 per cent, less than estimated.

The pick-up in demand allowed the economy to overcome cutbacks in government outlays caused by the partial federal shutdown in October. Diminishing fiscal challenges and progress in the labor market will probably sustain consumer and corporate demand in 2014, helping explain why the Federal Reserve decided yesterday to keep paring stimulus. “For a period that included a government shutdown, it was a pretty successful quarter,” Sam Coffin, an economist at UBS Securities LLC in Stamford, Connecticut, said before the report. “The momentum carries over into this year. The worst of the fiscal battles is behind us. We’ll see the economy picking up.”

Another report showed applications for unemployment benefits in the US rose more than forecast last week to the highest level in more than a month, partly reversing a post- holiday slump.

Jobless claims climbed by 19,000 to 348,000 in the period ended January 25th, which included the Martin Luther King holiday, according to US Labor Department data. The reading was the highest since mid-December.