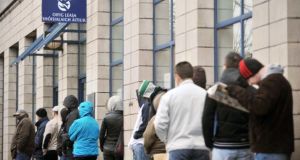 The unemployment rate was unchanged in June after falling to a six-year low of 9.7 per cent last month.

According to new figures from the Central Statistics Office, the seasonally adjusted unemployment rate was down from 11. 4 per cent when compared to the same month a year earlier.

The seasonally adjusted unemployment rate for those aged between 15 and 24 years of age was 19.8 per cent in June, compared to 20 per cent for the previous month.

The new estimates are primarily based on the Quarterly National Household Survey, which put the State’s jobless rate at 9.9 per cent in the first quarter of this year, but take into account changes to the Live Register.

Alan McQuaid, chief economist at Merrion said there was a net jobs increase in the economy of almost 33,000 last year with a predicted 40,000 extra to be added in 2015.

“While emigration has been a contributory factor in keeping down the unemployment numbers in recent years, there is clear evidence that there is more to it than just that, with employment conditions in the majority of sectors in the economy generally improving over the past year or so,” he said.

“Assuming the economy continues to grow strongly in 2015, as we expect, an average jobless rate of 9.7 per cent is envisaged for this year down from 11.3 per cent in 2014. We now think the figure at year-end based on these latest CSO data will be around the 9.3 per cent level, with the numbers of unemployed dropping below the key 200,000 mark,” Mr McQuaid added.

“The creation of wage increase expectations and the ever increasing costs of business are having a stultifying effect on employment growth. Government must understand how fragile the recovery is in the SME sector and that unless it is economically viable to hire more staff, SMEs simply cannot do it,” said Isme chief executive Mark Fielding.

Separately, new figures show that job postings in sectors which largely represent the foreign direct investment (FDI) sector continue to grow. The CPL Employment Market Monitor shows a rise in advertisements for positions in areas such as IT, sales and marketing, finance and banking, accountancy and engineering.

The latest index reveals an 11 per cent year-on-year growth in job postings. However, the average level of positions advertised in the second quarter was slightly down on the first three months of the year.

“While the growth shown in Cpl’s Employment Market Monitor is encouraging, growth has slowed down since early 2014. Between 2011 and 2014, the number of jobs posted roughly doubled. As the next election draws closer, there will be growing interest in whether this level of jobs growth can be sustained,” said the report’s co-author Ronan Lyons.

1 Angela Merkel sweeps in to save the euro zone
2 In six months we will be in the grip of a 1980s-style recession
3 Ibec warns ‘conservative’ lifting of lockdown will make downturn worse
4 Aer Lingus wants quarantine period axed to resume flights in July
5 Chartered Land moves closer to approval for Dublin’s tallest tower
6 Mortgage approvals tumbled in first full month of lockdown – BPFI
7 Property price drop of up to 12% this year a ‘reasonable’ assumption – McDonagh
8 Brother is dragging his heels as executor of uncle’s will - is there anything I can do?
9 Should my mam wait for house prices to drop before buying?
10 Retailers ‘asked to work almost like hospitals’ during reopening phase
Real news has value SUBSCRIBE