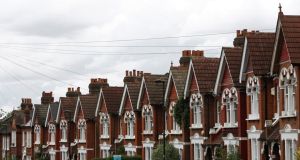 House prices have reached a new record high of £272,000 on average after surging by 11.7 per cent over the last year, according to an official report.

Several UK regions saw property prices reach fresh all-time highs in the month of July, with the East Midlands, the West Midlands and the South West now joining London, the East and the South East in having price levels higher than their pre-financial crisis peaks of 2007-08, the Office for National Statistics (ONS) said.

Property values in London continue to rise faster than the rest of the country, recording a 19.1 per cent year-on-year jump and taking the average property price in the capital to £514,000. On a month-on-month basis, property values increased by 1.6 per cent across the UK between June and July.

Average house prices in Scotland have now passed their pre-financial crisis peak of June 2008 and, alongside England, property values there are now at record levels, the ONS said.

During the 12 months to July, average house prices have increased by 12 per cent in England to £284,000, by 7.4 per cent in Wales to £171,000, by 7.6 per cemnt in Scotland to £198,000, and by 4.5 per cent in Northern Ireland to £139,000, according to the ONS figures. Estate agents have reported seeing signs of disruption to the housing market in Scotland in recent weeks, with potential buyers putting their plans on hold while they wait to see what the outcome of the referendum on independence will be.

The report also showed that first-time buyers face having to pay 13.5 per cent more to get on the property ladder than they did a year ago — and the ONS said this is the highest annual increase recorded for this sector since March 2005. The average price paid by a first-time buyer in July this year was £209,000. Figures released by the Council of Mortgage Lenders (CML) last week showed that the number of mortgages handed out to first-time buyers passed 30,000 in July, marking the first time this has happened during a one-month period since August 2007.

But first-time buyers are typically having to borrow record amounts to get on the property ladder, with the average size of a new loan taken out by this sector standing at £127,500 in July, according to the CML’s figures. The current low interest rate environment is helping to keep borrowing costs down, but home owners have been warned to start thinking now about how they will cope with the prospect of higher payments when the Bank of England base rate eventually starts to move off its historic 0.5 per cent low.