Chancellor needs to show he still has grip on the economy, has not lost control of public finances and can please Conservative backbenchers to maintain his reputation and support 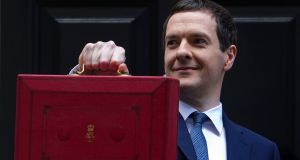 UK chancellor George Osborne. Headline growth rates will be revised down a few tenths of a percentage point for 2015 and 2016 to about 2.2 per cent, slower than Britain’s long-term average. Business surveys are much more muted, suggesting growth may slow further.

George Osborne’s eighth UK budget comes at a time of worsening figures on the UK economy and with the government split between those who want Britain to remain in the EU and the Eurosceptics who hope it will vote to leave.

The chancellor needs to show he still has a grip on the economy, has not lost control of the public finances and can please Conservative backbenchers to maintain his reputation and support.

His touch has deserted him recently , so this is a repair job as much to his reputation as to the economy and public finances.

He will make his budget statement to the House of Commons at 12.30pm and the following themes are likely to loom large.

There has been a surprising amount of change in the figures on the economy since the Autumn statement in November and almost all of it has been bad. Headline growth rates will be revised down a few tenths of a percentage point for 2015 and 2016 to about 2.2 per cent, slower than Britain’s long-term average. Business surveys are much more muted, suggesting growth may slow further.

Wage growth and inflation are also lower, but unemployment is falling faster than expected. One bit of good news is that nothing has happened to seriously worsen the outlook for the medium term.

Although tax receipts have been reasonable in 2015-16, they are coming into the exchequer a bit slower than hoped. Expect a small overshoot in borrowing compared with the £74 billion Office for Budget Responsibility forecast for this financial year.

For subsequent years, the worst news is that in recent revisions, the Office for National Statistics has revised down nominal gross domestic product - the cash size of the economy - by £18 billion, reducing the base on which taxes are levied. This will do significant damage to the public finance forecasts for the next five years, offset a little by more savings on projected interest payments on government debt because market interest rates have fallen again.

Without remedial action, the worse outlook for the public finances would probably prevent Mr Osborne from achieving his ambition of running a surplus of tax revenues over spending by 2019-20.

He has said he needs to cut another 50p in every £100 spent by government by then. This will be pencilled in late in the parliament, so it can be reversed if it is not needed. Expect spending cuts in either 2019-20, or even in the last financial year that starts before the election, 2020-21. Expect little detail on the affected departments. This will come later.

Mr Osborne will seek to sell off assets owned by the public sector to provide more funds for infrastructure projects. Network Rail will be told to sell stations and land for housing; Bradford & Bingley loans are on the block and the government is encouraging all public bodies to sell land suitable for housing developments.

The infrastructure commission has recommended the chancellor press ahead with Crossrail 2, a second cross-London rail link and a more modest faster train service linking the big cities of Manchester and Leeds. None of these projects requires big money yet because they will not be built for years, which probably means Mr Osborne can allocate a small number of millions of pounds to give the green light for detailed design work to begin.

Stung by public hostility to Google’s back-tax bill of £130 million, which Mr Osborne called “a major success”, the chancellor is likely to bring forward new measures to prevent companies from shifting profit overseas as a way of minimising tax. He is likely to cut tax relief on interest payments in a bid to raise hundreds of millions of pounds. There is also likely to be a crackdown on evasion of value added tax from foreign sellers on websites such as Ebay.

Now the chancellor has ruled out changing tax relief on pension contributions, he will be minded to stop some common tactics people use to minimise their income tax and national insurance payments.

The most common is “salary sacrifice”, where people get their employers to pay into their pensions, pay childcare or buy bicycles, and accept a lower salary in return.

This results in savings on employer and employee national insurance contributions, and sometimes has tax benefits too. Some say it costs £14 billion a year, and so is a tempting anti-avoidance target for the chancellor.

Mr Osborne likes to pose as the friend of savers, introducing the Help to Buy ISA last year to encourage people to save to buy property and a personal savings allowance for all taxpayers from this April.

He will go further for low income families in thebBudget, introducing a Help to Save scheme for people receiving in-work benefits, which will add 50p for every £1 saved after two years.

Because poorer families do not save much, this has a low cost to the exchequer. Expect other niche savings ideas in the budget.

Remember that although you are likely to hear more about giveaways, such is the weakened state of the public finances that tax rises are likely to exceed any cuts.

The case for raising the duty on petrol and diesel is strong because oil prices are low, but ferocious opposition among motorists and Conservative MPs will probably provide a blocking coalition. So, expect other minor taxes to increase. Insurance premium tax and council tax are in the line of fire.

Mr Osborne might raise the threshold for paying higher rate income tax a little to make progress towards the manifesto commitment of £50,000.

Other tax breaks aimed at working families are also likely, but do not be fooled. These will be small. Given the sensitivity of the politics, the chancellor is unlikely to lower the 45 per cent top rate of income tax, but might announce a review of its effectiveness.

Enterprising Treasury officials always compete to be the author of Mr Osborne’s surprise announcement, the one that is kept quiet from everyone except the closest officials. The chancellor will want it to create headlines so people do not focus on the bad economic news and the lack of giveaways.

Quite likely is a small but symbolic measure popular with Conservative MPs that shows Britain is sovereign over taxation and is not subject to rules from Brussels. That would kill quite a few birds with one stone.