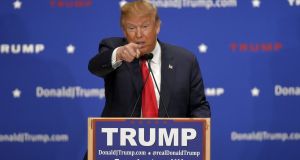 Losers have votes, too. That is what democracy means – and rightly so. If they feel sufficiently cheated and humiliated, they will vote for Donald Trump, a candidate for the Republican party’s presidential nomination in the US, Marine Le Pen of the National Front in France or Nigel Farage of the UK Independence party. There are those, particularly the native working class, who are seduced by the siren song of politicians who combine the nativism of the hard right, the statism of the hard left and the authoritarianism of both.

Above all, they reject the elites that dominate the economic and cultural lives of their countries: those assembled last week in Davos for the World Economic Forum. The potential consequences are frightening. Elites need to work out intelligent responses. It might already be too late to do so.

The projects of the right-wing elite have long been low marginal tax rates, liberal immigration, globalisation, curbs on costly “entitlement programmes”, deregulated labour markets and maximisation of shareholder value. The projects of the left-wing elite have been liberal immigration (again), multiculturalism, secularism, diversity, choice on abortion, and racial and gender equality.

Branko Milanovic, formerly of the World Bank, has shown that only two parts of the global income distribution enjoyed virtually no gains in real incomes between 1988 and 2008: the poorest five percentiles and those between the 75th and the 90th percentile. The latter includes the bulk of the population of high-income countries.

Similarly, a study by the Economic Policy Institute in Washington shows that the compensation of ordinary workers has lagged significantly behind the rise in productivity since the mid-1970s. The explanations are a complex mixture of technological innovation, liberal trade, changes in corporate governance and financial liberalisation. In the US – but also, to a smaller extent, in other high-income countries – the fruits of growth are concentrated at the top.

Finally, the share of immigrants in populations has jumped sharply. It is hard to argue this has brought large economic, social and cultural benefits to the mass of the population. But it has unquestionably benefited those at the top, including business.

Despite offering its support for welfare benefits one might think very valuable to the native working classes, the respectable left has increasingly lost their support. This seems to be particularly true in the US, where racial and cultural factors have been particularly important.

Mr Trump, Republican ideologues complain, is not a true conservative. That is indeed the point. He is a populist. He proposes unaffordable tax cuts. Crucially, he is protectionist on trade and hostile on immigration. These positions appeal to his supporters because they understand they have one valuable asset: their citizenship. They do not want to share this with countless outsiders. The same is true for supporters of Ms le Pen or Mr Farage.

In the US, elites of the right, having sown the wind, are reaping the whirlwind. But this has happened only because elites of the left have lost the allegiance of swaths of the native middle classes.

Not least, democracy means government by all citizens.

If rights of abode, still more of citizenship, are not protected, this dangerous resentment will grow. Indeed, it already has in too many places.

1 Lockdown exit: How can Irish economy reopen without big health risks?
2 Bank puts business owner on hold for month on Covid finance
3 Deliveroo branches into grocery deliveries in Ireland
4 Amazon fly dedicated aircraft into Belfast to fill online orders
5 Why we should be slow to use tracking apps in coronavirus response
6 Diageo withdraws full-year forecast in face of global Covid shutdown
7 Half of Irish SMEs expect revenue to fall by at least 60% in next three months
8 Finance ministers reconvene amid fears for euro zone
9 Government announces €1bn in supports for businesses
10 Government measures will ‘significantly’ support incomes, ESRI says
Real news has value SUBSCRIBE