With Britain preparing to quit the EU, Ireland may be isolated on CCCTB talks 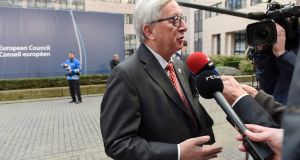 European Commission president Jean-Claude Juncker: due to talk to Swiss president Johann Schneider-Ammann on Friday to try reconcile the country’s 2014 referendum on curbing immigration with a 1999 EU-Switzerland agreement on the free movement of people. Photograph: John Thys/AFP/Getty

Ireland is facing another tax battle with the European Union and this time it will have to fight its own corner.

Less than two months after the European Union ordered Ireland to claw back a record €13 billion from Apple, saying the nation illegally allowed the iPhone maker to reduce its tax rate, the European Commission will propose legislation for a common consolidated corporate tax base (CCCTB) on Tuesday. A 2011 initiative failed to muster the unanimity needed largely because of opposition by Ireland and the UK

With Britain preparing to quit the 28-nation bloc, the fresh CCCTB proposal risks leaving Ireland politically isolated when national governments start getting their teeth back into the nitty-gritty.

The tax proposition, aimed at strengthening the European single market that Britain has championed, highlights the limits of the UK’s commitment to the EU and the extent to which political ideology can trump the country’s economic goals. The plan would save cross-border companies the cost of complying with different rules in each EU country where they file a tax return by establishing a single method for calculating taxable profits.

The UK and Ireland have opposed a common EU tax base for fear it would open the door to a harmonisation of rates, which both countries say must remain their sovereign right to decide. For Britain in particular, European tax initiatives over the years have been deeply unwelcome because they’re politically toxic domestically. The Brussels-based commission denies the proposal would be a first step toward harmonised rates in the EU, arguing the goal is more tax transparency and fairness.

Ireland risks further isolation because the common tax plan is also aimed at hindering those trying to avoid paying levies, and the Irish Government is already under fire for allegedly cutting the sweetheart deal with Apple. Ireland and Apple both vowed to fight the decision in the EU courts.

The impact of Brexit will also be felt this week in another small European country, this one outside the EU: Switzerland. Commission chief Jean-Claude Juncker is due to talk to Swiss president Johann Schneider-Ammann on Friday to try again to reconcile the country’s 2014 referendum on curbing immigration with a 1999 EU-Switzerland agreement on the free movement of people.

While Switzerland is seeking to enact the plebiscite with a “light” plan that would sidestep quotas for newcomers from EU nations in favour of a requirement that job vacancies be listed at Swiss unemployment centres, the bloc has expressed reservations about procedures for settling any future disputes. Those draft measures, the EU argues, unfairly favour Switzerland.

Before the UK’s June referendum in which 52 per cent of voters opted to leave the EU, the bloc might have been more willing to fudge over the relatively obscure issue of dispute settlement. In the wake of the Brexit vote and UK prime minister Theresa May’s vow to give priority to regaining national control over immigration, such flexibility would pose risks.

The other 27 EU countries and the commission are keen to avoid setting a precedent that could undermine their fundamental common position toward Britain: retaining privileged access to the European single market requires accepting the bloc’s tenet on the free movement of people.

The underlying threat is that a failure to settle the EU-Switzerland disagreement over the Swiss immigration plan would jeopardise a total of seven 1999 agreements between both sides, including the one on the free movement of people. That’s because there’s a “guillotine clause” that foresees the end of all if one is terminated.

After abandoning what would have been flagrant challenges to the free-movement pact and coming a long way to meet EU demands, Switzerland is now talking tough. Its finance minister, Ueli Maurer, on October 20th dismissed the need for further talks with the EU should the parliament in Bern stick with the plan currently on the table. A commission spokesperson declined to comment on Mr Maurer’s remarks.

Mr Juncker’s response to Mr Schneider-Ammann on Friday may signal just how determined the EU is to use Switzerland as an example for the upcoming Brexit negotiations. – (Bloomberg)

1 Should I switch bank now with Ulster Bank at risk of closing?
2 Air travel never going ‘back to way it was’
3 Will brother’s widow get half of our parents’ estate when they die?
4 Household wealth jumps by 74% since last recession – report
5 Tourism and aviation players demand von der Leyen end EU travel chaos
6 Irish insurers in focus as UK cracks down on dual pricing
7 Data privacy advocate submits further evidence in Google ads inquiry
8 Majority of submissions favour changing law on forestry licence appeals
9 Pallet manufacturer looks to imports as timber crisis takes root
10 House insurance: save yourself money by reviewing your policy
Real news has value SUBSCRIBE