Stiglitz: Ireland would have fared better by burning bondholders 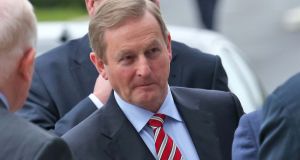 Taoiseach Enda Kenny said he would confirm the Government’s commitment to keep the cost-base under control and contain public spending when he met existing and potential investors at Davos on Thursday. Photograph: Collins

Ireland’s economy would have fared better if it had been permitted by the European Central Bank to burn private debt holders, Nobel Prize-winning economist Joseph Stiglitz has said.

Speaking at a panel debate alongside Taoiseach Enda Kenny in Davos today, the Columbia professor conceded that Ireland had performed better than other euro zone economies who were forced to undertake austerity programmes.

The award-winning economist who has been a consistent critic of the euro zone’s austerity policies, said he commended Ireland on its economic turnaround, but noted that it was only at the beginning of the curve, adding that the effect of austerity on countries such as Greece, Portugal and Spain has been “disastrous”, particularly in terms of youth employment and emigration.

“We defend 100 per cent the authenticity of the way we do business with international companies,” he said, noting that there had been “a lot of talk” in the United States about Ireland as a tax haven.

Referencing the European Commission’s ongoing investigation into Apple’s tax dealings with Ireland, Mr Kenny said that “no special deals” had been done. “There are no special deals done with any company by the Revenue Commissioners over the years,” he said, adding that Apple employed 5,000 people in Ireland.

Earlier, Joseph Stiglitz said that Apple had become the “poster child” of using ingenuity to take advantage of loopholes.

Taoiseach Enda Kenny met with a number of senior executives from US companies today in Davos, including Facebook’s Sheryl Sandberg. He is due to undertake a number of media interviews today with broadcasters including CNBC and Bloomberg.

Speaking earlier today, Mr Kenny said he is confident that Ireland will be insulated from some of the turbulence in the global economy.

“The challenges are there and are going to have to be met globally and will have an impact on so many countries. From our point of view, as a domestic economy which is open, we’ve put in place a long-term economic plan to insulate us in so far as that is possible from any of these shifts.”

This included a commitment to keep the cost-base under control, contain public spending and maintain competitiveness, he said, a message he would be communicating to investors.

A sell-off in world markets, prompted by a falling oil price and concern about the global economy are overshadowing the World Economic Forum in Davos.

Following Minister for European Affairs Dara Murphy’s warning yesterday that Ireland would not support Britain remaining in the EU “at any cost,” the Taoiseach said Ireland supported “very strongly” Britain’s continued membership of the EU.

But he added “whatever changes that are tabled or actually agreed should be to the benefit of all Europeans.”

Noting that the issue is expected to dominate the EU leaders’ summit in Brussels in February, Mr Kenny said it would be helpful if negotiations on the British referendum could be concluded in February to allow British prime minister David Cameron to hold a referendum “at some time in 2016”.

“The Union would be weaker without Britain,” the Taoiseach said, noting that reports by the Department of Finance and the ESRI had highlighted the serious economic consequences of a British exit from Europe.

The Taoiseach has no plans to meet the British prime minister who is addressing the World Economic Forum today in Brussels.

Among the senior figures the Taoiseach will meet today include the president of Argentina, and senior executives from Google, Facebook, Uber, Microsoft and PayPal.

Other highlights of today’s session in Davos will be a panel discussion on “The Future of Europe,” in which Greek prime minister Alexis Tsipras and German finance minister Wolfgang Schauble will give their views on the European financial and political landscape.

EU commissioner Pierre Moscovici told Bloomberg News on Wednesday Greece must improve its pension proposals in order to move ahead with its bailout program and start discussions on easing its debt burden.

Bailout monitors, who were due to travel to Athens this week, have still not returned to the Greek capital.

The EU economics chief is due to discuss the Greek bailout on Thursday with the Greek prime minister and IMF managing director Christine Lagarde.

1 ‘Saudi Arabia is where the opportunities will happen in future’
2 Why Irish households are not, after all, among the best off in the EU
3 Nokia timeline
4 Dubliner modernising the city of Palo Alto
5 Trump’s TikTok move may have far-reaching consequences
6 Apple and Samsung announce unthinkable partnership
7 Should my mam wait for house prices to drop before buying?
8 Paul Krugman: Monopoly capitalism is killing US economy
9 Oura ring: Wearable device that tracks activity and vital statistics
10 Waste-to-energy company BHSL raises further €8.5m
Real news has value SUBSCRIBE