Ryanair to accept cash payments from customers in Greece 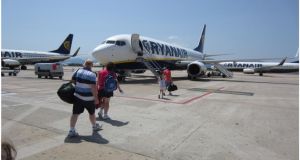 Ryanair has said customers in Greece can pay with cash at airport ticket desks.

A spokesman for the airline Ryanair said many Greek customers were unable to book online with their cards, due to capital controls prohibiting payments via debit or credit card to accounts outside Greece

“Ryanair has now provided the option for Greeks looking to travel to buy their plane tickets in cash at the Ryanair ticket desk at its airports,” a statement from the airline said.

The imposition of capital controls on Sunday evening means Greeks are no longer able to purchase goods or services from many big international online suppliers suych as Ryanair, Google, Amazon, Apple and Facebook.

Transfers of funds out of Greece were banned to prevent a collapse of the banking system after prime minister Alexis Tsipras rejected the terms of a bailout offer from international lenders.

This is a problem for the big online retailers, music download sellers and airlines, who sell to clients across Europe from centralised transacting subsidiaries, often in Luxembourg or Ireland, and often for tax reasons.

Since Monday, many Greeks have found they can no longer make payments online to such companies.

“I tried to pay Facebook three euros for a small advertisement but my card was rejected right away,” said Greek e-commerce consultant Panayotis Gezerlis.

He added that he had also failed to purchase music from Google and to make a payment from his bank card via eBay’s payment unit, Paypal.

Google told Greek clients in a Facebook posting that it was working to find a solution.

Google’s European customers contract with an Irish subsidiary when buying advertisements. The system allows the group to pay almost no tax on profits from these sales, but also means almost every sale is a cross-border transaction.

Amazon customers in Greece buy from a Luxembourg-based company. An attempt to place an Amazon order with a Greek bank card failed on Tuesday.