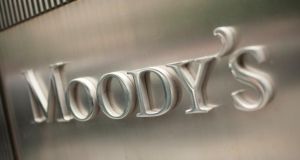 Donal O’Mahony of stockbroker Davy clearly isn’t trying to make any friends at Moody’s, with his latest research, A Tale of Two Agencies, firmly arguing that the ratings agency has no good reason for being so out of step with its peers on the Irish sovereign.

O’Mahony focuses on the differences between Moody’s and Standard & Poor’s, with the latter’s rating (BBB+) carrying a positive outlook and the former (Ba1) sticking with a negative outlook since 2011.

With a loudly buzzing bee in his bonnet, the bond analyst argues that the “extraordinary disparity of opinion regarding Ireland’s credit quality is worthy of closer scrutiny”.

He notes that while there are bigger gaps between the agencies on other countries (five notches on their ratings for Greece, four on Slovenia), the “dramatic” difference in outlook between them on Ireland is unique. This, the analysis suggests, is based on differing treatments of “risk”, with Moody’s focusing particularly on Ireland’s “susceptibility to event risk”.

An example of this might be a new decline in the housing market, or perhaps a Greek exit from the euro zone, something O’Mahony reckons has substantially faded from the list of our biggest fears.

“As with the case regarding Ireland’s evolving fiscal story, it is difficult not to level the accusation of a ‘rear-view mirror’ Moody’s take on the Irish banks,” the bond analyst says.

O’Mahony’s most complimentary description of Moody’s sees him refer to the agency’s stance as “stoic indifference” in relation to the positive Irish fiscal developments of the past year and a half.

His unwritten views, perhaps discernible by reading between the lines, are presumably considerably less complimentary.