Protests in Brussels as talks on EU-US trade deal falter

Demonstrators protest against TTIP ahead of trade ministers’ meeting in Bratislava 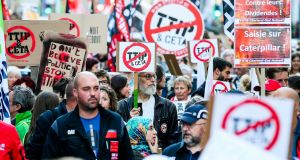 Protestors against the Transatlantic Trade and Investment Partnership and Comprehensive Economic and Trade Agreement demonstrate in Brussels on Tuesday. Photograph: Stephanie Lecocq/EPA

Demonstrators took to the streets of Brussels on Tuesday to protest against the trade deal between the European Union and the United States, as negotiators on both sides of the Atlantic move to imbue the transatlantic trade and investment partnership (TTIP) with fresh momentum.

With EU trade ministers due to gather on Friday in Bratislava for an informal meeting, Brussels is hoping to secure an EU-wide commitment for the deal ahead of November’s US presidential elections.

The prospect of an agreement on TTIP before the end of this year receded in recent weeks as senior figures in the French and German governments raised concerns about the deal, including French prime minister Manuel Valls and German vice-chancellor Sigmar Gabriel.

Ireland was one of 12 EU countries which signed a letter last week reiterating their commitment to the EU-US trade negotiations, which have been ongoing since 2013. Among the outstanding issues left to be resolved concern public procurement, with the US opposing any moves to open subfederal contracts to Europe.

Some member states, led by Italy, have called on the EU to rubber-stamp the chapters of the negotiations that have already been agreed by the end of the year amid fears that the trade deal could be sidelined by the next US administration.

Tuesday’s protests in Brussels, which centred on a giant Trojan horse erected outside the European Council headquarters in the Belgian capital, followed similar protests in Germany over the weekend.

While TTIP is expected to be discussed at Friday’s meeting of EU ministers, the EU-Canada trade agreement known as Ceta will top the agenda, with Canada’s minister for international trade due to attend the meeting in the Slovakian capital.

In a Bloomberg interview on Tuesday, Chrystia Freeland welcomed the decision by Germany’s SPD party to back the EU-Canada deal at a meeting on Monday.

Mr Gabriel secured the support of his SPD party for the agreement, removing a potential block to the endorsement of the deal. While he said earlier this month that the EU-US trade talks had “de facto failed” he had reiterated his support for Ceta, an agreement that is opposed by many within his party.

Ms Freeland described the SPD’s support as “an important moment” for the deal.

While Ceta has already been endorsed by member states, and is due to be ratified at an EU-Canada summit on October 27th, it must also be ratified by up to 38 national and federal parliaments following a European Commission decision in July.