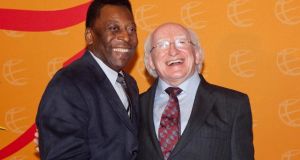 The first European head of state to speak at the influential Cumbre de Negocios conference in Guadalajara, Mr Higgins told hundreds of Mexican businesspeople that Ireland was resolved “not to waste the chastening experience of recession and to learn the positive lessons for the future.”

The future lies “not in returning to the failed economic path of reckless speculation and bubble economics, but to a sustainable model of nurturing talented people, creating valuable goods and services, innovating and connecting to global partners, customers, and investors in enduring ways,” he said.

In a sharp critique of the policies that led to the global financial crisis, Mr Higgins said the difference between the two models was between “pursuing opportunism and embracing opportunity, between the illusion of a virtual economy and the sustainability of a real economy.”

Economic rebalancing and a new ethical approach to business has been a common theme during the President’s speeches on his tour of Latin America.

Ireland and the European Union could learn from countries such as Mexico which record positive economic growth while trying to end “the misery of extreme poverty” through job creation.

Ireland was determined to build on the Irish people’s “creativity, innovation, high level of education and openness to new models,” he said in the keynote address of his visit to Mexico.

“We will not waste our energies on seeking to relive that which has failed. Invention rather than imitation has been our strength, be it in James Joyce’s Ulysses or in the new microchip from Intel, in Co Kildare,” he said in a speech delivered in English, Irish and Spanish.

Ireland experienced “the consequences of economic reversal painfully and directly – flowing simultaneously from the global financial and economic crisis, over which we had little control, and from the destructive fallout from the collapse of a domestic construction and banking bubble,” he said.

‘Gateway to Europe’
He also encouraged Mexican companies to invest in Ireland, which offered “enormous potential” to companies as “a gateway to the European market,” he said.

Dublin will host a conference next year for Mexican companies willing to invest in Ireland, while Mr Higgins has invited President Peña Nieto on a state visit in 2015. Mr Higgins said new policy choices must be taught to protect people from “consequences of reckless speculative movements in economies that have rightly been labelled ‘fictive’ versions of the economy”.

On a flight from Mexico City to Guadalajara on a Mexican government jet, Mr Higgins said it was clear that the economic model that will guide this century “will not be one that is made out of the broken bits and pieces of that which has failed” but in a real balance between economy and society.