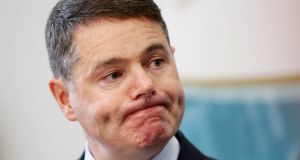 Minister for Finance Paschal Donohoe: confirmed he had begun transferring his shares in drinks giant Diageo to his wife. Photograph: Sam Boal/Rollingnews.ie

Paschal Donohoe, the Minister for Finance, is attempting to head off any criticism that he could have a perceived conflict of interest when setting alcohol taxes in the forthcoming budget. The Minister confirmed to The Irish Times that he had begun transferring his shares in drinks giant Diageo to his wife.

Mr Donohoe declared tranches of shares in Diageo and in Proctor & Gamble, where he worked before entering politics, in the Oireachtas Members’ register of interests.

Before he was appointed Minister for Finance, Mr Donohoe had previously absented himself from some Cabinet discussions on the alcohol industry to avoid any perceived conflicts.

However, the ongoing ferocious lobbying campaign by the alcohol industry to lower taxes on drink in the budget brought his Diageo holdings back into the spotlight, as he will be the one to make the decision on alcohol taxes in next month’s Budget 2018 speech.

In July, Mr Donohoe said he would consult with his family over what to do regarding his Diageo shares, and insisted they would have no bearing over his decisions as Minister for Finance.

In recent days, a spokeswoman for Mr Donohoe said the Diageo shares were originally granted to his wife, Justine Davey, who worked for Diageo in Dublin as a senior marketing executive.

“A portion of the shares were jointly held in the Minister’s and his wife’s name,” said the spokeswoman.

“The process of putting all shares back into the Minister’s wife’s name is now under way. This process will have no impact on any decision taken by the Minister on budget day.”

Meanwhile, the scale and intensity of the alcohol industry’s lobbying campaign to lower excise on drink is revealed in the latest returns to the lobbying register, which have flowed in over the last week.

The Drinks Industry Group of Ireland (Digi), an industry body that represents all levels of the industry but is financed mainly by big manufacturers , has been at the forefront. Employers’ group Ibec has also been extremely active in the campaign to lower drink taxes.

Digi directly lobbied 51 TDs, Senators and councillors to lower drink taxes over the last three months, according to its return to the register. It also hired the public relations and lobbying firm PR360, which is run by Dan Pender, a former government adviser under Fianna Fáil.

PR360’s lobbying return reveals scores of meetings with TDs and Ministers, including lobbying of Ministers Michael Ring and Simon Coveney, as part of Digi’s efforts to get drink taxes lowered.

The Ibec-affiliated Alcohol Beverage Federation of Ireland, whose members include Diageo, also lobbied extensively on the tax issue over the summer, according to its returns.

The drinks industry wants an across-the-board cut of 15 per cent in excise tax, which would cost the State about €220 million. The industry argues that Irish alcohol taxes are among the highest in Europe, and are constraining investment in the sector.