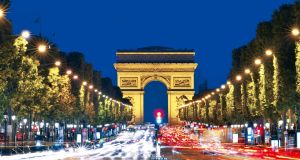 Paris is trumpeting the lifestyle it could offer to London’s high financiers in the event of a Brexit. Photograph: iStock

Paris is preparing a warm welcome for City of London bankers that it says will have to move to the continent if the UK votes to leave the EU next month.

“We will be rolling out the red carpet,” said Jean-Louis Missika, a deputy mayor of Paris, at the launch of a campaign this week to attract financiers to the city in the event of a Brexit.

Such a gesture might seem unusual for a country that tends to have an ambivalent relationship with high finance. President François Hollande declared it his “enemy” in 2012 as he proposed soaking the rich with a 75 per cent tax rate.

But such hostility seemed long forgotten at this week’s event, where the French financial and political elite unveiled a slogan to attract bankers to the city: “Welcome to Europe”.

Gérard Mestrallet, the president of Paris Europlace, a group set up to promote French finance, said that he did not want the UK to leave the EU but, if they did, Paris would be there to “welcome” any bankers.

The fight to attract financial jobs represents the continuation of an enduring battle with London. But it is also a struggle with other euro zone cities, particularly Frankfurt, to become the hub for euro trading in the currency bloc.

Dublin has also been pitching for any mobile jobs that may emerge after the Brexit vote, with banks including Standard Chartered and Royal Bank of Scotland already approached by IDA Ireland.

London’s standing as Europe’s dominant financial centre has long been a source of irritation across the continent. Roughly a third of all euro-denominated trading currently happens in the City — even though the UK has remained resolutely outside the euro zone.

Many believe this would have to change following a Brexit, and that banks would be compelled to move jobs or even headquarters from London to the eurozone to continue trading unhindered.

HSBC said earlier this year that it would move around 20 per cent of its London workforce — about 1,000 jobs — to Paris in the event of a Brexit, saying jobs would go from the trading room and investment banking.

“Between 30-40 per cent of all euro trading happens in London,” said Stéphane Boujnah, the chief executive of Paris-based stock exchange Euronext. “This kind of anomaly would not last if there was a Brexit.”

French officials on Wednesday argued that Paris was best positioned to welcome any London cast-offs, with more to offer than Dublin, Amsterdam or Frankfurt.

They trumpeted the existing financial infrastructure in Paris, a city that is home to four of the ten largest banks in Europe, measured by assets. Paris already has 800,000 financial workers.

The city also offers cheaper office space than London as well as a good education system with a focus on mathematics and transport links with the rest of Europe, according to boosters.

“We have the people and the infrastructure of be a global financial centre. It is already there,” said Olivier Klein, the chief executive of co-operative bank BRED Banque Populaire.

Then there are the lifestyle advantages of relocating to Paris, one of the world’s great cities, with its wealth of opera houses, theatres and restaurants.

“There is a different atmosphere in Frankfurt,” Marie-Anne Barbat-Layani, head of the French Banking Federation, said with some understatement.

Valérie Pécresse, former budget minister and president of the region Île-de-France, added: “We have a quality of life that is incomparable in Europe . . . We are in a good position to welcome a number of expats and companies.”

“The government needs to send the right messages. Lowering some social charges would be a start,” Ms Barbat-Layani said.

In spite of Mr Hollande’s earlier rhetoric, the French government has started to shift its stance on high finance as part of a wider move towards more business-friendly policies it is counting on to restart a sluggish economy. Finance minister Michel Sapin last year said: “My friend is finance, but good finance.”

Ms Pécresse said on Wednesday that her enemy was “not finance, but unemployment”. She also argued that the real source of political instability for businesses was not France but rather the UK.

Even if the UK votes to remain, she said, the very fact that a referendum on its EU membership was allowed should be a worry. “The sensible choice [for businesses] is not to stay in a land that could leave Europe one day but to make a choice to invest long term in a land that will always stay in Europe,” she said.