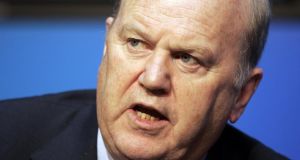 Minister for Finance Michael Noonan moved last year to scrap an Irish legal provision which was used by Apple to minimise its tax burden.

The OECD has set out far-reaching plans to eliminate aggressive tax avoidance by big multinationals, an initiative which is likely to prompt changes to the Irish corporate tax regime.

The proposals published today by the Paris-based organisation mark the first phase of an effort by the global community create a single set of international tax rules to ensure large companies pay their fair share of tax throughout the world.

“Our recommendations constitute the building blocks for an internationally agreed and co-ordinated response to corporate tax planning strategies that exploit gaps and loopholes of the current system to artificially shift profits to locations where they are subject to more favourable tax treatment,” said OECD secretary general Angel Gurria.

This initiative is highly sensitive for the Government due to sustained international criticism of aggressive tax strategies deployed in Ireland by large American companies such as Apple and Google.

Criticism of the Irish regime centres on legal provisions linked to the 12 per cent corporate tax rate, which is the centrepiece of the Government’s inward investment policy and its drive to boost employment in the wake of the economic crash.

In question now is whether the Government responds to the OECD plan with steps in the budget next month or whether it waits until later. The Government is undecided but it is acknowledged in official circles that contentious schemes such as the “double Irish” arrangement will be eliminated sooner or later.

The Government spurned Franco-German pressure to dilute the Irish tax regime at the time of the EU-IMF bailout but the OCED plan comes on foot of directions from the global community, via the Group of 20 industrialised and developing nations. The initiative was high on the agenda when Group of Eight leaders including US president Barack Obama met last year at a summit in Co Fermanagh.

Although the OECD plan released today is not binding on governments, moves are already afoot to develop a binding multilateral convention in which participating governments would be compelled to modify bilateral tax treaties to minimise the risk of aggressive avoidance.

OECD members, Ireland among them, and G20 members are to meet next January to consider a draft mandate to negotiate a convention to streamline execution of the OECD plan.

This initial round of OECD proposals will be followed by a further swathe of measures next year.

The current plan is designed to ensure “coherence” of corporate tax rules at the international level. It centres on four types of scheme used by big companies to minimise tax payments, among them arrangements used by many companies based in Ireland.

These deal with complex schemes linked to the transfer pricing of intangible assets and hybrid mismatch arrangements in which firms take advantage of differences in the tax treatment of financial instruments in two countries to cut the tax they pay.

They also deal with the abuse to tax treaties, in which firms not resident in one of two states in a treaty seek to obtain benefits granted to resident firms.

Further proposals aim to develop country-by-country reporting rules, under which large firms would be obliged to provide information on the global allocation of their income and tax payments. They would also be required to divulge how their subsidiaries do business in particular jurisdictions and the business activities carried out by entities within their corporate network.

Anxious to minimise reputational damage arising from scrutiny of the Irish regime, Minister for Finance Michael Noonan moved last year to scrap an Irish legal provision which was used by Apple to minimise its tax burden.

Mr Noonan has signalled he might introduce further changes in Budget 2015 next month in the light of the OECD campaign to stamp out base erosion and profit shifting strategies around the world.

However, it remains unclear whether the Government takes pre-emptive action or waits to see how other countries respond to the OECD plan.