OECD barks on tax – but can it bite? 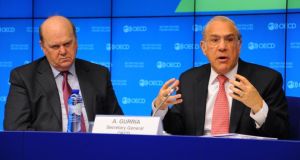 Some of the key ideas governing how multinational business is taxed are being questioned in a project being run by the Paris-based Organisation for Economic Cooperation and Development. The end result is likely to be the introduction of a new template that will operate for the coming decades.

The process has enormous potential for affecting the position Ireland has established in international business and, in particular, its success in attracting multinational employers here in part because of our 12.5 per cent corporation tax rate.

According to Feargal O’Rourke, head of tax with PricewaterhouseCoopers (PwC) in Dublin and chairman of the taxation commission of the American Chamber of Commerce in Ireland, the project is progressing at a speed that is unprecedented in the arena of global taxation.

While he does not believe the entire OECD agenda will be achieved, he expects the changes that will emerge over the next two to three years will shape the global tax environment for the coming two to three decades.

Two years ago, finance ministers from the largest economies in the world – the G20 – asked the 34-member OECD to look at the issue of how multinational businesses were being taxed. The Paris-based organisation came out with a 15-point Action Plan on Base Erosion and Profit Shifting in 2013, and this proposed schedule of work was approved by the G20 ministers.

After that comes the all-important issue of whether the proposals will be implemented by national governments into local tax laws.

The European Commission has observer status at the G20 and, in that sense, all EU member states have an input into the G20.

The ideas being worked on in Paris are being developed by working groups that have representatives from all OECD member states. Thus the ideas now emerging in draft form are the product of a process in which Ireland is involved.

Given the enormous importance of foreign direct investment to Ireland on the employment and taxation fronts, it has a particular interest in the outcome of the process. Like almost all the states involved, it is acutely concerned since the economic crisis with finding stable tax revenue streams and maintaining the integrity and reputation of the tax system.

The crisis has also fed into the controversy over very profitable multinational companies organising their affairs so they avoid tax. Larger economies resent the way so much trade in the world’s digital economy, in particular, is nominally taxable in Ireland.

But, at the same time, these same larger economies, the US in particular, are home countries to the multinationals involved, and are careful about introducing changes that their multinationals would consider to be against their interests.


Technological advances
A particular issue in the fight to combat Base Erosion and Profit Shifting (Beps) is the problem caused by the so-called digital economy. Proposals in this area could directly threaten Ireland’s FDI position.

A draft discussion report on the digital economy was issued by the OECD this week, and is available on the organisation’s website. Submissions on the proposals therein are now being invited, with everyone from countries to multinationals and professional bodies to citizens being invited to make their views know.

The deadline is April 14th, after which there will be a “public meeting” in Paris on April 23rd, and then a review of where matters stand by the group that produced the draft report.

While the French are understood to have wanted key new concepts introduced to target the digital economy, the report says that technological advances mean that there is little real distinction between the digital economy and the economy overall. So the policy proposed is to adjust existing concepts to make them fit for purpose in the digital age. This was the view favoured by the United States.

It is hoped that a final report on the digital economy might be ready for June or July of this year, with the plan being that it, as well as proposals for six of the action points, will be ready for next September’s G20 meeting of finance ministers.

It is unusual for the OECD to move at the pace it has been in relation to the tax base erosion project. The speed with which the project has been unfolding is a reflection of the rapid development of the digital economy, the pressures on the public finances of the developed world, and the egregiously successful tax planning of companies such as Google, Microsoft, Apple and Facebook.

One of the key shifts being proposed is a change to a century-old view of where a multinational business should be taxed.

The current model goes back to colonial times and was designed to ensure that, for instance, a London-based mining company operating in South Africa, ending up booking its taxable profits in London, and not in Cape Town. It also belongs to a time when goods, rather than goods and services, were the focus of world trade.

What is being proposed now is the idea that companies such as Google that have headquartered operations in Dublin from which they make sales around Europe, would be deemed to have a presence in the markets in which they actually make sales, as well as in Ireland.

At the moment, companies have to tick a number of boxes before becoming tax resident in a particular jurisdiction, or be deemed to have a permanent establishment in that jurisdiction. The OECD is talking about ideas such as companies having a permanent establishment in countries in which a lot of their customers are located (the companies would be deemed to have a “significant digital presence”), and other connected ideas. The overall objective is to create a greater alignment between taxation and the jurisdictions in which a company’s business activities take place.


Existing concepts
Of course, this works to the advantage of larger jurisdictions and against the interest of smaller jurisdictions, such as Ireland. And, crucially, it dilutes the competitive importance of Ireland’s low corporation tax rate, as profits become taxable across a range of jurisdictions, irrespective of where the company’s manned operations are located. It is for this reason that the draft proposals coming from Paris are of such concern to Irish policymakers.

Chartered Accountants Ireland made a submission to the OECD committee working on the digital economy report, in essence arguing that the tax residency issue should be addressed by way of clarifications of the existing concepts, rather than radical redesign’. After the release of the draft report, Brian Keegan of the institute, which is acting as the voice of the profession on the matter, urged Irish business to make submissions to the OECD objecting to the proposed changes.

He was, he says, surprised by the draft report’s suggestions about aligning taxation with business sales and says that smaller countries need to point out that they will lose out to larger, developed economies if the proposals go ahead. “Bad things happen when people don’t object,” he says when asked if he thinks the proposals might actually be implemented by governments.

The 15th point on the action plan being worked on by the Beps committee is an instrument or treaty that countries could vote on in their parliaments, and which would have the effect of immediately bringing into play the other 14 points.

It is often the case that proposed solutions to complex international problems fail to go ahead because the implementation is too difficult – especially if they require multiple votes. This latter idea is an effort to deal with this issue.

The Beps project is being overseen by the OECD’s Committee on Fiscal Affairs and a key member of that body is Robert Stack, deputy assistant secretary (international tax affairs) at the US Department of the Treasury. Stack, and French representative Richard Marcuse, are co-chairs of the digital economy group, and are seen as representing opposite ends of the argument as to what should be done.

US companies are at the forefront of developments in the digital economy, and it is considered unlikely that the measures of most concern to Ireland will be proposed in their more extreme form, and implemented, if the US is against them.

On the other hand, no one, including multinationals, wants countries, such as France introducing special taxes aimed at companies like Google. The speed at which the OECD is working on the issue if a reflection of its desire to prevent such developments, according to one source involved.


Common cause
Some years ago, an idea dubbed the Common Consolidated Corporation Tax Base was examined by the European Commission. This involved the apportionment of a company’s taxable profits across the markets in which it sold product, had employees, had its management, and so on.

One of the difficulties that emerged was that it clashed with the philosophy behind the Single European Market, which is designed to encourage a company based in Dublin, Cork or Oslo, to sell its products across the union from its home base as if it was operating in one, rather than a number of, jurisdictions. The digital presence idea may involve similar difficulties.

Ireland can make common cause with other smaller states within the OECD, to fight against proposals that would benefit larger states at their expense.

All of that said, it is generally recognised that the international tax model produced in the early 20th century is no longer fit for purpose given the nature of business in the 21st century.

From January of next year, people in the EU who download an iTunes song will pay VAT at the rate of the country they are deemed to be in, as against the current situation, where they pay VAT at the rate that applies in Luxembourg, where the relevant Apple subsidiary is located. The new regime affects consumers, but not Apple.

- Address the taxation of the digital economy

- Change rules on interest deductions that erode the tax base

- Alter transfer pricing rules to address base erosion in the areas of:

intangibles; risk and capital; and other high risk transactions

- Monitor and assess base erosion and impact of policies introduced

- Develop a multilateral instrument for implementation of the above