Decision to bail out the bondholders was ‘deep mistake’ 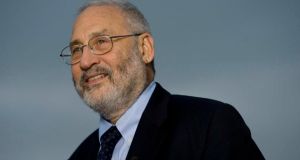 Joseph Stiglitz said Ireland was facing a lost decade as a result of the bailout. Photograph: Daniel Acker/Bloomberg

Ireland is facing a lost decade as a result of the Troika bailout, Nobel Memorial Prize winner Joseph Stiglitz said, as the country neared the end of its bailout programme.

Speaking on RTE Radio One, Mr Stiglitz said it was a “deep mistake” to bail out the bondholders. He said he was “astonished” at how Irish people accepted the situation without protest.

“A good share of the blame has to go to the ECB and commission for not restructuring the debts,” Mr Stiglitz said.

He said it was the ECB and others who wanted to save the banks, “so it was a trade off between banks all over Europe and the Irish citizens”.

Mr Stiglitz predicted a “lost decade” for the Irish economy before it got back on its feet, and the country would be unlikely to get back on the growth path it was previously on.

Austerity “essentially never worked”Mr Stiglitz said. However, he said the decision to stay in the euro was probably the right one.

His comments came as the Troika’s final review said irelnad’s programme remains “on track in the context of the nascent economic recovery”. The final report noted the high unemployment rate, but welcomed steps to improve employment incentives and plans for private sector provision of employment services.

“Additional redeployment of resources is needed to ensure meaningful engagement with job seekers, especially the long-term unemployed, and to provide training relevant to the job market,” a statement from the Troika said.