Nepal counts the cost of earthquake

Remittances from abroad will prove key to helping fund reconstruction 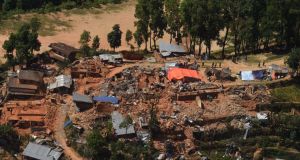 Over a week since the devastating Nepal earthquake that left thousands dead, hundreds of thousands injured and homes and businesses destroyed, Nepalis are slowly coming to terms with the huge task of rebuilding their shattering economy.

Nepal is one of the poorest countries in the world, with more than 40 per cent unemployment and a per capita GDP of just €890. Last year its GDP was about €60 billion.

Economic growth has been stuck at about 5 per cent annually for the past few years, and political deadlock means there is no impetus to push the economy forward in any meaningful way.

Nepal’s economy is built on agriculture, with the sector employing three quarters of the country’s 27 million people. One quarter of people live below the poverty line.

Shops are slowly reopening, but many people are still leaving the Kathmandu Valley and heading to their home villages. Most tourists are already out of the country.

Outside the Yak and Yeti hotel in Kathmandu, a shopowner points to the Buddha T-shirts, Nepalese artefacts and other tourist trinkets hanging from his deserted shopfront. The owner shakes his head.

“Who will buy these now,” he says. “The tourists may not come back. Even people in Kathmandu are leaving still, so how can we expect tourists to come?”

It’s probably too early to tell what the cost of recovery will be. In a research note, Rajiv Biswas, Asia-Pacific economist with IHS, forecast that initial reconstruction costs could exceed $5 billion (€4.5 billion), or about 20 per cent of Nepal’s economy. The US Geological Service puts reconstruction at $10 billion (€8.9 billion) – or half of GDP.

Many Nepalis are still sleeping in the open, and the United Nations believes that 600,000 houses have been destroyed or damaged. It has said that eight million people have been affected, with at least two million in need of tents, water, food and medicines over the next three months.

In the short-term, many Nepalis are worried about what will become of the remittances that they receive from overseas . In 2013, some 28.8 per cent of Nepal GDP came from overseas remittances. Since the quake, there have been communications difficulties making the payments.

Once these issues are resolved, the amount of remittances is likely to spike as migrant workers send money home for reconstruction. There are two million Nepalis working abroad, most of them in in the Middle East.

“A co-ordinated international disaster relief and long-term reconstruction program will need to be funded by bilateral assistance from donor nations and development financing agencies under the co-ordinated management of multilateral institutions such as the United Nations,” Biswas wrote.

Tourism, which accounts for 7 per cent of jobs in Nepal and 8 per cent of the economy, will unfortunately take a major hit.

“It’s been devastating,” says Biswas. “Their tourism economy has obviously come to a halt. I don’t know when it would be realistic for tourists to again visit Nepal.”

1 Election adds to headaches for AIB boss Colin Hunt
2 Irish people like nothing more than being bribed with their own money
3 Fast-growing frozen food group has a strong appetite for success
4 Construction body calls for loan scheme to help first-time buyers
5 The Irish economy is thriving but if you’re not feeling it – here’s why
6 Hogan warns Britain on US trade deal as EU set to impose tariffs
7 Barclays to cut 100 senior roles as lender seeks to rein in costs
8 Climate apathy in Northern Ireland could impact on the Republic
9 Ulster Farmers’ Union calls for vegan ads to be removed from buses
10 Pointy sale: How a Google reject built a $160m company and sold it to Google
Real news has value SUBSCRIBE