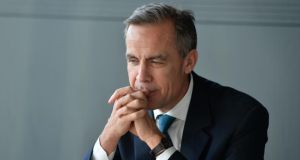 Mark Carney: sees scant cause to draw parallels between the “unique” plight of Greece and the scene here. Photograph: Alan Betson

Syriza’s overwhelming victory in the Greek election and its push for a big debt writedown have prompted claims that Ireland should follow suit. But Mark Carney, governor of the Bank of England, sees scant cause to draw parallels between the “unique” plight of Greece and the scene here.

On a flying visit to Dublin, Carney says the risk of Greece’s unresolved troubles infecting other members of the single currency has eased since Europe reinforced its firewall against crisis at the height of the debt debacle. “It’s much more of an idiosyncratic situation as opposed to a systemic situation. It’s important for Greece, and it’s important to get this right, but we should keep it in perspective.”

He argues, however, that more private and public risk-sharing will be required in the medium term to make the currency union more effective. While that raises the contentious notion of financial transfers from a deeply reluctant Germany to weaker countries, he says every successful currency union has some form of fiscal arrangement between members.

Carney was born into a largely Irish family in Fort Smith in Canada’s Northwest Territories. Three of his four grandparents left Co Mayo for Canada in the 1920s and he carries an Irish passport. After studying economics at Harvard and Oxford, and a 13-year career with Goldman Sachs, he made his name in global central banking as governor of the Bank of Canada from 2008. He left for the Bank of England in 2013.

With Greece’s borrowing costs on the rise since Alexis Tsipras took power on Monday and its stock market in decline, the man from Threadneedle Street says Ireland is not in the same space at all. “I would very much hesitate to draw analogies between Greece and Ireland,” he says.

“Ireland has made tremendous progress. It’s got more to do and I recognise that it’s difficult, but if one were to compare the progress in Ireland versus that in Greece, they are absolutely different situations.”

Tsipras has set about asserting his authority in Athens, halting a privatisation programme yesterday and insisting he will stand by his anti-austerity rhetoric. Still, Carney points to “the statement of the prime minister today not to default, the intention of remaining in the euro zone and finding a viable solution for Greece and for the euro area”.

Although corridor talk in the euro zone suggests Greece might receive an interest cut on loans and a reprofiling of repayments, Carney says he has “no special insight” into the likely outcome of discussions between the country and its creditors.

Of course, the outburst of the Greek crisis in 2009 led to years of turmoil in the euro zone and fears that the currency could fall apart with catastrophic consequences for the financial system. Although the country’s fate is in the balance yet again, the governor of the Bank of England sees little danger for British banks or banks elsewhere in Europe.

“ This is largely an issue about Greece as opposed to having broader lessons for other countries in the euro area. I’ve underscored that, whereas a few years ago there were concerns of contagion from Greece to other countries, considerable steps have been taken in the interim to lessen those risks.

Crucial here is availability of the European Central Bank’s outright monetary transactions programme under which the Frankfurt-based institution would buy unlimited quantities of sovereign bonds to prevent a stricken euro zone country from being forced from the currency.

But if that deals with the question of financial contagion, what of political contagion from Tsipras’s arrival in the prime minster’s office?

“I think what is necessary for any government is to devise and execute a set of policies that are going to deliver prosperity over the medium term. There are no simple solutions to do that in today’s world. There’s no one policy, there’s no one step, there’s no one move that will deliver that.”

Carney gave a speech yesterday evening in Iveagh House in memory the late Jim Flaherty, the former Canadian finance minister who would berate colleagues in the G20 for their lack of progress in the battle to contain the disruption in the euro zone.

His essential message is simple. While welcoming the ECB’s “boldness” in its adoption of quantitative easing last week, he says Europe must go further to develop a comprehensive, coherent plan to anchor expectations, build confidence and escape the debt trap.

Such a plan could not be “wholly reliant” on difficult structural reforms.

Most countries in the advanced world are going through a deleveraging process to cut debts, he notes . “What we have in the euro area is savings trapped in regions or countries and they’re not flowing freely. So how do we get them to circulate within the euro area? More private risk sharing – banking union, capital markets union – and an element of public sharing which would be some form of transfer union. And I would observe that every successful currency union has some form of fiscal arrangements.”

This presents the inevitable problem of German resistance. While Europe toyed with jointly issued Eurobonds when the turmoil was at its worst, the idea ran foul of Berlin.

Carney’s response is clear enough. “These types of issues building greater private risk sharing and greater public risk sharing are as much in the interest of German people as they are in any constituent part of the euro zone,” he says.

“Obviously, if you enter into a union, you should take steps to make that union as effective as possible, but also in a way that works for everybody. And the prosperity of all countries in the euro area is as much in Germany’s interest as it is in those countries’ interest, and the German government recognises this.

“I think we should acknowledge that the German government has made tremendous investments in the viability of the euro area, through various facilities such as [the] ESM [bailout fund] and in working towards structural reforms such as banking union and now capital market union. And so this is absolutely to reinforce what the German government has done but in the context of completing the set.”

But the German question remains. The ECB’s new stimulus plan delivered a big boost to the euro zone but it received a cold response from the Bundesbank and chancellor Angela Merkel. If quantitative easing is so controversial in Germany, how would the Germans ever accept fiscal transfers?

“One of the things that’s incredibly important about the decision last week by the ECB is that there is unanimity across all the governors at the ECB about the legitimacy of the instrument,” he says .

“So the ECB action is important because of the stimulus that it will provide to the European economy – the euro area including Ireland, very importantly.

“It’s important to the UK because this is the second-largest economy in the world, the euro area, and it’s our largest trading partner so we care about that and that’s one of the reasons why we welcome it.

“But it’s also important because it affirms that the ECB has the full suite of tools of a central bank and having that affirmation – having that demonstrated and recognised unanimously by members of the governing council – that helps reduce or take out this tail risk of a very bad outcome.”

Although his reference to the importance of Britain’s links with the euro zone is clear enough, Carney has nothing to say about the prospect an EU referendum after a general election due in May.

“I’m not going to prejudge any political outcomes. I would say from the perspective of the Bank of England, we accept realities on the ground which is that we are a member of the EU. We work closely with our European partners . . . and it’s a very successful partnership.”