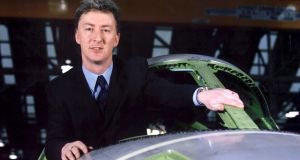 Bombadier vice-president Michael Ryan: wrote to the workforce to say he believed it was better for the Canadian aerospace group if the UK remained part of the EU

Moy Park, owned by the Brazilian meat producer JBS, and Canadian-owned Bombardier had previously declared their support for the Remain side.

Michael Ryan, vice-president of Bombardier Belfast, had written to the Northern Ireland workforce to say he believed it was better for the Canadian aerospace group if the UK was part of the EU.

A Bombardier representative had said: “Access to integrated European supply chains is critical to our business, and the free movement of goods across Europe contributes significantly to our competitiveness.”

Moy Park’s chief executive Janet McCollum had also voiced her support to Remain as it gave UK companies open access to a market of 500 million consumers. Both Bombardier and Moy Park are now having to come to terms with the new post-Brexit reality.

‘Too early to speculate’

“As always, we are committed to our businesses, all our employees and our customers in the UK, and we will continue to work with the government and other industry stakeholders to create the necessary business environment to ensure our future success.”

Meanwhile Moy Park has acknowledged that changes are inevitable.

“[The vote] has set the pathway for the UK to leave the EU and we respect the voters’ decision. Although there will be changes to the environment in which we operate, we are confident that we have a robust business that can continue to thrive and grow,” it said.

Mr Dorsett said: “The UK is an intrinsic part of our European supply chain and we urge all parties to reach an agreement that quickly removes the uncertainty, allows the UK to retain full access to and from the single market and protects the interests of businesses with strong commitments and investments in the UK.

“Caterpillar remains committed to a competitive presence in the UK and will diligently look at ways to mitigate the impact of the UK’s decision to leave the EU on our valued customers, employees, shareholders and partners in our integrated supply chain.”

However, one Northern Ireland entrepreneur believes Brexit could deliver an upside. Dr Peter FitzGerald is managing director of Antrim-headquartered healthcare group Randox, and he says the majority of his company’s global trade is outside the EU.

“Whilst there are clearly important issues to be addressed. . . there will be potential benefits for our UK operations if there is a reduction in the administrative burden imposed by Brussels. “And, in any period of currency volatility, there will be benefits in a fall in Sterling, as this will support our UK exports.”

He has also stressed that the UK exit from Europe will not impact on its facility in Dungloe, Co Donegal.