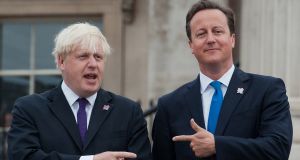 Happier times: British prime minister David Cameron (right) and London mayor Boris Johnson point at each other as the London 2012 Paralympic Cauldron is lit in London’s Trafalgar Square in 2012.

Just 3 per cent of business leaders in the Republic and Northern Ireland believe the UK should leave the EU, according to a survey.

The “potential knock-on effect for the Irish economy” was cited as the key motivation for respondents in the Republic.

The need for the EU to be united in an increasingly globalised market was also highlighted as important, however.

The survey was conducted by Coyne Research on behalf of Chartered Accountants Ireland.

Of the 2,840 respondents, 70 per cent were based in the Republic, 12 per cent in Northern Ireland with the remainder in Britain and overseas.

The main reason cited by those advocating to stay across all areas was that “the EU is stronger with the UK as a member”.

Respondents also cited factors such as a potential negative impact on the Irish economy and the importance of a united EU in the face of global competitiveness.

Respondents backing a “Leave” vote suggested “the UK would be stronger outside the EU” and that it would have “greater control over economic migration”.

Speaking at accountancy conference in Barcelona, deputy president of Chartered Accountants Ireland Liam Lynch, said the study was a broad-based and reliable insight into what senior business leaders, not just in the UK, but also in Ireland and overseas, are thinking about the upcoming EU referendum.

“While there is no shortage of conflicting reports, projections and speculation on both sides of the debate, in my view the business community have little to go on but conjecture and opinion - in effect, it is impossible to forecast either the vote or its effect,” he said.

“ The prevailing message from our members is one of uncertainty, and this seems likely to have an impact on business decisions at a micro and macro level across these islands in the run-up to the referendum,” Mr Lynch added.

A separate study released in Britain revealed UK employers have a “significant” reliance on workers from the EU, especially in manufacturing, accommodation and food services.

EU employees are generally educated to a higher level than UK-born staff, with only 15 per cent having left formal education before the age of 17 compared with 44 per cent of those born in the UK, it was found.

EU employees represent 5 per cent of occupations such as managers, directors and professionals, although high numbers also work in jobs requiring no formal qualifications such as cleaners and shelf-fillers, according to research by the Social Market Foundation and Adecco.

There are currently 1.6 million EU workers employed in the public or private sectors, making up 6 per cent of all UK employees, said the report. Adam Hawkins, managing director of the Adecco Group, said: “This research raises serious questions about the potential impact of Brexit.”

He said: “With 1.6 million EU workers currently working in the UK, making up 6 per cent of all UK employees, thousands of businesses could be left in limbo for years following a vote to leave.”