Interview: Outgoing Revenue Commissioners head is proud of her time leading the department 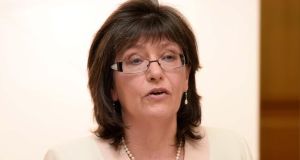 Josephine Feehily: is not impressed by businesses that have ‘fancy corporate social responsibility policies’ and don’t regard tax as part of that.

The international tax environment is still too unsettled for one to predict how any changes taking place will affect the State’s attractiveness for foreign direct investment, according to outgoing chairwoman of the Revenue Commissioners Josephine Feehily.

Feehily (58), who took on the position of chairwoman of the Office of the Revenue Commissioners in 2008, just as the State’s economic collapse was becoming evident, was not only at the head of the organisation as it struggled to cope with the crisis in the public finances, she has also played a prominent role in the global tax debate.

In an interview with The Irish Times, Feehily said the ability of corporations to shift their profits between jurisdictions would be “severely constrained” if the type of changes now being worked on by the OECD’s Base Erosion and Profit Shifting (Beps) project were put into effect.

However, the State, with its corporation tax policy of having a broad base and a low rate, would be able to compete internationally “if the field is level”. So one of the key issues would be to ensure that there was a level playing field globally.

A crucial aspect, therefore, of any new global regime would be the mechanisms that were put in place to ensure countries did not pay lip-service to the new rules, she said.

Referring to the so-called “double Irish” tax structure, which has caused great controversy, Feehily said that the OECD’s Pascal Saint-Amans had often pointed out that “a single Irish is not too bad”.

The State, with its 12.5 per cent corporation tax rate, has a strong position from which to compete. It is possible that the amount of profit that is being booked in the State by multinational corporations (MNCs) with regional headquarter operations here could be reduced but, Feehily said, the corporations concerned tend to have substance here and have not indicated any desire to leave.

“At the end of the day, Ireland is interested in the jobs these companies provide,” as well as their spending in the economy and the tax they pay. “The environment is still too unsettled to predict what the final shape will be.”

She said it was also very difficult to read what influence unilateral moves such as the UK’s so-called Google tax (not a phrase Feehily used) would have on the OECD’s Beps project. She described the UK’s “diverted profits tax” proposal as “an interesting innovation”.

One of the great changes that occurred during her five years at the helm was the growth in the flow of information between the Revenue and other organisations here, and between the State and other jurisdictions. It is, she said, becoming increasingly difficult for people and corporations to conceal income from the Revenue.

While the tradition had been for customs agencies to co-operate internationally, and for tax administrations to operate on a national basis, the latter would soon be outdoing the former in terms of the organised exchange of information.

The US, she said, had led the charge on a lot of this, with the attitude it took to Swiss banks aiding US citizens to evade tax, leading in time to the Foreign Account Tax Compliance Act (Fatca), the controversial US law which requires foreign financial institutions to report to the US Internal Revenue Service, about the bank accounts of US customers.

Proposals now being worked on as part of the Beps project for the automatic exchange of information have come out of Fatca and are a part of a development that Feehily describes as a “game changer”.

For the Revenue Commissioners, these changes have caused it to focus on how it can maximise the advantage to be gained from the huge flood of information likely to be available in the next two years.

The organisation has had a small advanced analytics team (advanced analytics, the automatic analysis of data, is a phrase Feehily used on a number of occasions during the interview), but that is going to change as the Revenue gears itself up to maximise the use it will make of the new data. Recruitment advertisements will appear early in the new year.

Examples of how information on tax matters is becoming available through different avenues include: the Luxleaks files on advanced tax agreements negotiated by PricewaterhouseCoopers in Luxembourg; data from HSBC’s Swiss branch concerning bank accounts there and secured by the French tax authorities some years ago and since shared with other tax authorities including the Revenue; and an enormous cache of electronic data which the UK’s tax administration is sharing with counterparts around the world.

The huge amount of data the UK gives to the Revenue is said by it to be information about tax shelters across the globe used for personal tax, as against corporate tax purposes. “It is very hard data to crack,” Feehily said. The UK authorities have been giving workshops to the tax administrations it has given the data to, to assist them in analysing it. “It is a slow burner.”

The EU, she said, is very interested in introducing joint and multilateral audits of MNCs that would give “end to end visibility” to tax administrations about a corporation’s affairs and be “another game changer”.

Another important aspect of the changes being worked on by the OECD is that they may have an important effect on developing countries. The rules that are currently in use were designed in the last century for the developed world.

Feehily said she was “taken aback” by the low importance given at board level to the potential reputational risk for businesses that can arise from its tax practices. She said she “reserves a particular irritation” for businesses that have “fancy corporate social responsibility policies” and don’t regard tax as part of that.

She said the reputational risk that could be associated with a corporation’s tax policies was an issue for company compliance officers and should also be a major focus for non-executive directors. While much of the focus for the interview was on changes on the international front, the issue that dominated her term of office was “fiscal consolidation”, she said. Six months into her new role, she got a call from the then secretary general of the Department of Finance, David Doyle, to say there was going to be an emergency budget. That was followed by the bail-out and the arrival of the Troika.

“We were extremely mindful that when it came to fiscal consolidation, then the income side of that was our job.”

With the country plunging into recession, Feehily and the Revenue Commissioners knew the focus had to be on maintaining compliance. Among the areas they targeted for particular attention were: “the drift into cash, including in the white collar economy”; attempts by those who had money to create new and inventive shelters for their income given the disappearance of property and other tax shelters; and the danger of people and businesses trying to ease their financial pressures by making fraudulent repayment claims.

While Troika officials were at the outset wary of the targets set for Revenue, over time they came to respect its efficiency, something Feehily said may in part have been due to the IMF’s lack of experience in dealing with well-functioning tax administrations in bail-out situations.

She has massive respect for her staff, who not only maintained but improved compliance against the background of an economic collapse, while at the same time suffering the pay cuts and other pressures associated with the Haddington Road agreement.

The introduction and bedding down of the property tax is another source of pride and she noted that senior figures in the IMF thought at the time that such a tax could not be introduced on a self-assessment basis.

There are now 800, or 14 per cent fewer staff in the Revenue than there were when she took on the top position. There is a lot of churn behind that number, and at times the organisation was below the threshold set for it in employment terms, allowing it to recruit new professional staff at a time when it was “a very suitable labour market from our point of view”.

Lawyers, accountants and bankers with tax qualifications, all joined the organisation, with many of them now working in the large cases division. The most recent budget allowed for a small increase in employment and expenditure.

On the customs side, Ms Feehily said a lot of work had been done to address diesel laundering with a view to being able to trace the product from the time it lands in Dublin port, so as to spot any “leakage” into criminal operations.

One of the three commissioners who have formed the board of Revenue since 1998, Feehily has in that time had board-level executive responsibilities that included policy and legislation, tax collection, strategy and organisation development, the large cases division and the customs service.

Before joining the Revenue in 1993, she worked in the Department of Social Welfare and the Pensions Board. Feehily is to take the role of chairwoman of the new policing authority next year.