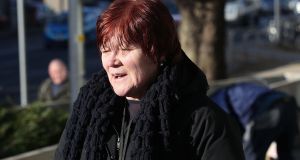 Joan Collins TD was in court on Thursday for the opening of her appeal against a November 2013 three-judge High Court decision rejecting her challenge against the issuing of €31bn in promissory notes by the Minister for Finance. Photograph: Collins Courts

The issuing of €31 billion promissory notes in favour of Anglo Irish Bank and other financial institutions by the minister for finance in 2010 involved an unconstitutional allocation of public money without a Dáil vote, lawyers for Independent TD Joan Collins told the Supreme Court.

Ms Collins’s case is an “enormous” one with “enormous implications”, her counsel John Rogers SC said.

Her core argument was the 2008 Credit Institutions (Financial Support) Act impermissibly gave the minister power to decide, without Dáil approval, how much the banks needed to meet the regulatory requirements necessary to keep trading.

It was not constitutionally permissible for the Oireachtas to empower the minister to enter into “effectively unlimited” commitments on behalf of the State without any, or any meaningful constraint or oversight.

This issue cannot be determined on the basis of a view, given the scale of the financial crisis facing the State from 2008, there was “no option”, Mr Rogers said in reply to Mr Justice Donal O’Donnell.

The 2010 notes were an “appropriation” of public money in breach of Article 11 of the Constitution, which deals with appropriation of public resources, he said.

The Dáil was given no opportunity to approve the promissory notes prior to the minister making a legally binding commitment to issue those and its elected members, including Ms Collins, were presented with “a fait accompli”.

Ms Collins, accompanied by several supporters including Social Democrats TD Catherine Murphy and Independent MEP Luke ‘Ming’ Flanagan, was in court when her appeal opened on Thursday against the High Court’s rejection of her case.

The appeal, which continues on Monday, is being heard by a seven-judge Supreme Court, presided over by Chief Justice Susan Denham, due to the importance of the issues raised.

In November 2013, a three-judge High Court ruled the promissory notes issued in 2010 were validly issued under the 2008 Act and also found that Act was constitutional .

The minister’s provision of financial assistance via the notes did not require either a separate Dáil vote or defined upper limit on that assistance, it ruled.

The case concerned two promissory notes of 2010 under which the State agreed to pay some €31 billion to Anglo, Irish Nationwide Building Society and Educational Building Society over 15 years to 2025.

The notes allowed the institutions get emergency liquidity assistance from the Central Bank.

After the winding up in 2013 of Irish Bank Resolution Corporation, successor in title of Anglo/Irish Nationwide, the Anglo note, on which €25 billion was then outstanding, was converted into long-term Irish government bonds.

The Supreme Court heard, following reorganisation of the finances of Allied Irish Banks (owner of EBS), the EBS note is no longer in existence.

In submissions, Mr Rogers argued the High Court had erred in finding the 2008 Act specified the necessary adequate principles and policies to render the delegation of such power to the minister constitutionally permissible.

No meaningful principles and policies restrain the actions of the minister, it was argued.

The High Court was told the decision to issue these promissory notes was made when the Troika was here in 2010 putting pressure on the government to support financial institutions here, he said.

While it was significant the 2008 Act said financial support “shall” not be provided for any period beyond September 2010, that provision was later amended and that two-year limitation became “meaningless”.

The issuing of the promissory notes conflicted with Article 11 of the Constitution which provides “all revenues of the State shall, subject to such exception as may be provided by law, form one fund and shall be appropriated for the purposes and in the manner and subject to the charges and liabilities determined and imposed by law”.

The court must consider what is meant by the phrase “charges and liabilities determined and imposed by law”, he said.

The 2010 budget made no reference to a €3.1 billion expected instalment payment to Anglo in March 2011, he added.

The Dáil could not revisit the matter later because the minister’s commitment to pay the notes was made as a matter of law and could not be reversed.

When Mr Justice Peter Charleton suggested TDs could have decided they were being asked to “jump off a financial cliff” and voted against the 2008 Act, Mr Rogers said that was not the issue.

The issue was whether it is in accordance with the Constitution to give the minister power to give unlimited sums of money to financial institutions without reference to the Dáil, with the effect it was impossible for the Dáil to identify the extent of the “charges and liabilities” being appropriated.

That meant these notes were illegally given, counsel argued.