Is collaboration or competition best strategy for economists?

Irish economists have become more open to learning from other disciplines 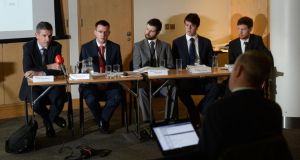 A recent article in one of the top US economics journals, the Journal of Economic Perspectives, had the ironic title The Superiority of Economists.* The French authors, an economist and two sociologists, looked at academic economics, especially in the US, making a number of interesting points.

One of the most obvious criticisms they made was that the academic discipline in the US is more male-dominated than other social sciences, something that probably also applies across Europe.

Another important observation was that, while other social science disciplines in the US are willing to learn from economics, economists show little curiosity to benefit from the insights of sociology, psychology and political science.

One of Ireland’s leading economists of the last 50 years, the late Denis Conniffe, used to give a fascinating lecture on the history of econometrics in which he showed that most of the interesting methods economists thought they had discovered had actually been pioneered in other disciplines, such as agricultural science. The implied lesson was that economists were slow learners, and it would clearly have been beneficial to recognise that other disciplines had something to teach economics.

In Ireland, over the last 40 years the economics profession has suffered from some of the failings identified by the article cited – such as male dominance at the higher levels. However, especially in recent years, there has been a greater openness in Ireland to learning from, and to working with, other disciplines to better understand the Irish economy and society.

One of the drivers of this enhanced co-operation across disciplines has been the development of large data sets by the Central Statistics Office (CSO) and the Economic and Social Research Institute (ESRI). These provide an opportunity to answer many important questions about health, education, childhood and old age, as well as about the economy itself. To fully exploit the riches in these data sets, it has proved essential to involve expertise across a wide range of disciplines, such as sociology and psychology.

The history of the ESRI mirrors this evolution. When it was set up it in 1960, it was as the Economic Research Institute. However in the mid-1960s a “social” remit was added, reflecting a clear need for a broader approach to social science research in Ireland. It is now often difficult to classify any particular publication as primarily economic or primarily social.

And, bucking the trend in a male-dominated profession, the distinguished economist who is the current ESRI director is a woman.

Another change in recent decades within the discipline of economics in Ireland has been the growth in team working. When I joined the ESRI over 30 years ago, the tradition was you worked away in your office thinking great thoughts on your own. Coffee was brought to your room so that there would be no distractions.

In subsequent years the way we worked evolved. Coffee breaks played an important role in encouraging collaboration and increasing productivity! The research programme on poverty, which began in the late 1980s, necessitated collaborating across disciplines. The success of this work showed what could be achieved by the team approach.

As an example of how things have developed, of the last 36 ESRI publications, only six have had single authors; the rest involved work by a number of joint authors spread across many institutions and a number of disciplines.

This experience runs counter to the evidence on the economics profession in the US, as discussed in the Journal of Economic Perspectives article. The authors of that article cite evidence from the US suggesting that studying economics inhibits co-operation. The more collaborative approach in Ireland may reflect differences in the topics researched and also in an emphasis on applied research bearing on policy. In Ireland, if you are going to do research on social and economic policy, it is important to interact with policymakers to understand the important questions to be answered. In addition, where the research questions are much wider than the state of the macro-economy, a multidisciplinary approach can be beneficial.

The majority of economists working in developed economies today are working outside academia. However, in the public sector in Ireland in the 1990s and the 2000s, there was a strong focus on generalists, and a tendency to undervalue specialist expertise, whether in accountancy, law or economics.

This gap in economic expertise within the public sector is being gradually addressed with the development of the Government Economic Service. While a world ruled by economists would be a sad place, a world without economists would also be much the poorer.

The article on The Superiority of Economists ended with the well-known quote from Keynes “If economists could manage to get themselves thought of as humble, competent people, on a level with dentists, that would be splendid!”

Humility is not only a virtue, but it can also bring benefits in terms of better and more useful research. * http://iti.ms/1K3PrSc