The Investec Purchasing Managers’ Index fell to 61.5 from 62.5 in September 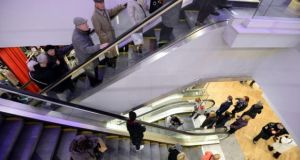 Ireland’s economy is set to grow by almost 5 per cent this year, a rate the European Commission said on Tuesday would make it the fastest-growing economy in the European Union.

The Investec Purchasing Managers’ Index of activity in the services sector, which covers businesses from banks to hotels, fell to 61.5 from 62.5 in September, but remained just short of June’s seven-year high.

The index has been above 60 for the past eight months and has not fallen below the 50-point line denoting growth since July 2012, when Ireland was midway through a three-year EU/IMF bailout programme.

“Following on from Monday’s solid manufacturing PMI release, today’s report serves as a further illustration of the recovery underway across the bulk of Ireland’s private sector at this time.”

The sub-index measuring new export business fell to 60.6 from 64.2. Mr O’Sullivan said that while the data showed resilience in Irish exports to non-euro zone markets, Irish firms are not going to be immune to any slowdown across the 18-member euro zone.

The data also follows figures on Tuesday that showed Irish consumer sentiment fell to its lowest level since June last month, putting the mood among consumers at odds with the recovery outstripping the rest of Europe.

More than 100,000 people marched in towns across Ireland last weekend in a second day of mass protests against the introduction of water charges, the biggest display of opposition to government austerity measures after years of taking painful measures with little resistance.