Irish households ‘wealthier than even before’ before Covid-19 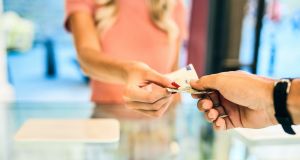 The combined wealth of Irish households hit a record €802 billion at the end of last year, equating to €162,960 per person.

This means that , on paper at least, households here were wealthier than at any other time in the history of the State before the Covid-19 crisis struck.

The headline figure is now significantly ahead of the boom-time pre-crash peak of €719 billion achieved in the second quarter of 2007.

Central Bank figures show household net worth rose marginally in the fourth quarter of last year on foot of financial assets, which rose in value by €7 billion, due to increases in the value of insurance and pension schemes.

Housing assets, the main driver of household wealth here, fell in value to €540 billion, a decrease of €5 billion over the quarter.

It is, however, considered a crude measure of prosperity as it hides the distribution of household assets and liabilities across income groups and age categories.

The latest figures show household debt fell by €331 million over the quarter, continuing the downward trend, to stand at €135 billion at the end of 2019. This equates to €27,386 per capita.

While debt levels here have fallen since the low point of the crash, Irish households remain highly indebted by European standards.