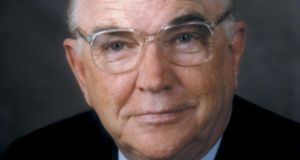 Irish-American businessman Don Keough, a champion of Ireland who promoted Irish studies in the US and encouraged American corporate investment into Ireland, has died aged 88.

As the long-serving president and chief operating officer of Coca-Cola Mr Keough, who was famous for his sales and marketing expertise, helped turn the Atlanta-based company into a global brand.

He brought the drinks company to Ireland in the 1970s, helping to make the country a popular destination for American companies.

Mr Keough retired from Coca-Cola in 1993 but remained on as an adviser to the board of directors and later as a director himself.

He was chairman of the family-owed New York investment bank Allen & Co, a one-time backer of Dublin stockbrokers Merrion Capital, and a long-time trustee at the University of Notre Dame in Indiana.

The Iowa-born businessman, whose great-grandfather Michael Keough emigrated from Co Wexford in the 1840s, was presented with honorary Irish citizenship by President Mary McAleese in 2007.

In November 2012, e was among the first recipients of an Irish Presidential Distinguished Service Award honouring members of the Irish diaspora and received the award the following March from the then tanáiste Eamon Gilmore at a ceremony in Atlanta.

He and his wife of 65 years Marilyn donated tens of millions of dollars to the university and helped fund the college’s expansion to Ireland lending his name, with Irish businessman Martin Naughton, to the Keough-Naughton Institute for Irish Studies.

The Keough-Naughton Notre Dame Centre is located on Merrion Square in Dublin. His recent donations to the college included a $50 million gift for the Donald R Keough School of Global Affairs last year.

Mr Keough, for a time chairman of the university’s board, helped to bring the college’s famous American football team and 35,000 fans to Dublin in 2012 for the Notre Dame-Navy game.

He was chairman of Columbia Pictures from 1985 to 1989 and also served on the boards of Berkshire Hathaway, the investment company of his long-time friend Warren Buffett, as well as McDonald’s Corporation, The Washington Post Company and HJ Heinz.

Tributes were paid to Mr Keough after he died surrounded by family in Atlanta where he had been in hospital with pneumonia.

Taoiseach Enda Kenny said: “A great Irishman and a great American, he will be sorely missed by all who knew him and leaves an enormous legacy including through his philanthropy. As one of Ireland’s greatest friends, Don built lasting business, cultural and education connections with Ireland which have helped thousands celebrate their own roots and forge new partnerships.

“The establishment of Coca Cola plants in Wexford, Drogheda, Athy and Ballina are testament to his commitment to Ireland. We have lost a true friend.”

“He was a titan,” said New York-based Irish-American publisher Niall O’Dowd and a friend of Mr Keough’s. “He was totally passionate about Ireland. He located Coca-Cola in Ireland and pioneered the development of American multinationals moving to Ireland.”

Asked once for his advice to people starting out in business, he said in 2002: “You must have an innate sense of curiosity. When young people say to me, ‘I really don’t understand this,’ that’s the beginning of wisdom because you know this person is never going to make a pronouncement without knowing what they are talking about.”