Why did almost no one realise that Anglo Irish was not just illiquid but insolvent?

Government pledged €440bn without knowing the nature of the banks’ crisis 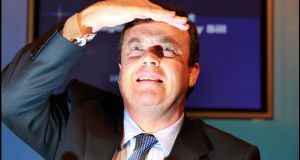 Finance minister Brian Lenihan: Was there not an onus on him and Brian Cowen to assure themselves as regards the gamble they were taking that the problem with the banks was not a solvency one? Photograph: Brenda Fitzsimons

There is understandable fury over the giddy amusement of Anglo Irish Bank executives on the concealment from the financial regulator that the bank would need in excess of €7 billion to rescue it. But the real horror of the revelations is that these executives knew by September 18th, 2008, 12 days before the bank guarantee, that the bank was insolvent, and that the problem was not liquidity.

What is staggering is that nobody outside the bank appears to have known this and nobody bothered to establish whether this was so or not. Was it not the job of the financial regulator to know these things and if it was not, what was the point of the financial regulator? None of the battery of all-knowing economists perceived the banks were insolvent, not just illiquid. Except Morgan Kelly.

It is baffling that nobody linked the much talked-about imminence of a property crash to the solvency of the banks. For instance, David McWilliams, the economic commentator, who for years had been prophesying the collapse of what he regarded as the “property bubble”, was the one urging the government and the minister for finance Brian Lenihan personally to give a blanket bank guarantee. David McWilliams must not have believed himself!

But, most shockingly, the government of the day, supported by much of the opposition, pledged, on behalf of the Irish people, to guarantee the banks to the extent of €440 billion, without knowing whether the banks had a liquidity crisis or a solvency crisis. And what was even more outrageous is that executives in Anglo Irish Bank appreciated that the bank was insolvent and said nothing, while the Irish people were put on the line for its huge losses – if that is so!

Remember the governing statement issued on the morning of the bank guarantee, September 30th, 2008, saying it was putting in place, “with immediate effect a guarantee to safeguard all deposits (retail, institutional and interbank), covered bonds, senior debt and dated subordinated debt (lower tier II) with (six institutions, including Anglo Irish Bank)”? It said this was being done “to safeguard the Irish financial system and to remedy a serious disturbance in the economy caused by the recent turmoil in the international financial markets”.

Lenihan, introducing the legislation to give effect to the guarantee, said we had no need for anxiety that this would cost the State a lot of money because there was a huge buffer of €80 billion of net bank assets available before there was any question of the State having to pay anything. Richard Bruton, then Fine Gael spokesperson on finance, said Fine Gael was “offering support for this Bill because we believe it will copper-fasten our financial system”.

Joan Burton, who was then the spokeswoman on finance for Labour, said: “I do not doubt that drastic action, national and international, is necessary to stabilise the situation. We agree with that.” Pat Rabbitte was ambiguous about his support for the Bill and was challenged by the then tánaiste, Mary Coughlan: “I am trying to ascertain whether Deputy Pat Rabbitte is for or against the Bill”, to which Pat Rabbitte replied: “I am not against it”.

Greatest reservation
Interestingly the greatest reservation was expressed by Michael Noonan, who questioned whether the problem with the banks was just a liquidity one. He suspected it was a solvency one also. But he voted for the guarantee.

The real crux is that in our political culture the instinctive impulse was to defer to the sacrosanct power of financial institutions, believing that only through their viability could the public welfare be protected.

There is a further question about the blanket bank guarantee. On the day before the blanket guarantee was issued, the then UK chancellor of the exchequer, Alastair Darling, was assured by Brian Lenihan there would be no blanket guarantee. A few hours later Lenihan collaborated in issuing a blanket bank guarantee, much to the fury, not just of Darling, but of the ECB also. Is it possible that Cowen and Lenihan devised the blanket guarantee deliberately to ensure the inflow of huge funds into the Irish banks, as occurred and as, we now know, David Drumm of Anglo Irish Bank sought to exploit? And, incidentally, it is not remotely likely that Drumm was the only Irish bank executive to seek to do that.

Of course we need to know how all this happened and why. Enda Kenny professes to want that too, without willing the means.

An Oireachtas inquiry does not have the legal powers and would not have the investigative expertise or the independence from the political system to do that. We need an independent public inquiry, even if chaired by a judge and even with the attendant coterie of extravagantly overpaid lawyers. For the coterie of lawyers will be in attendance at whatever inquiry is instituted.