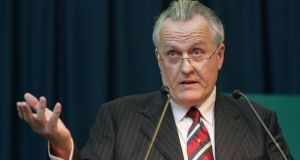 The Irish business environment remains challenging but small and medium enterprises are increasingly confident that things are getting better.

The quarterly Isme business trends survey found that, as a whole, firms had raised their sales and export expectations in the three month period. There were positive results in 10 of 12 areas surveyed, with current and future investments (both down four points) the only areas of decline among the 786 respondents.

Isme said investment was affected by seasonal factors but that economic uncertainty and reduced consumer spending were also contributors to decline in the area.

Readings above and below zero suggest expectations of growth and contraction respectively among respondents.

The survey, conducted in the last week of June, found confidence was highest among exporters, who (at 33 per cent) had displayed levels three times above the average.

Respondents were confident when it came to current exports (up seven to 29 per cent) and future exports (up four to 49 per cent).

The retail sector, however, continues to struggle with respondents working in the area reporting a decline in business environment and reducing their investment plans to some 16 per cent below the national average for SMEs.

“Once more the survey points to a dual economy of domestic sector struggle beside an international trading sector emerging slowly from the recession,” Isme chief executive Mark Fielding said.

“While the retail sector is investing in shop fit-outs, training and customer initiatives, the best the Government can do is to form another talk-tank, under the Action Plan for Jobs. ”

Profitability expectations increased among respondents from -9 to 0, which was the same level as this time last year. The business environment reading remains in negative territory but rose 6 points to -29 per cent.

For the third quarter in row, respondents said they expected sales to increase and the current sales category rose from a reading of -8 in the first quarter to zero. The current and future employment gauges both rose for the third consecutive quarter.