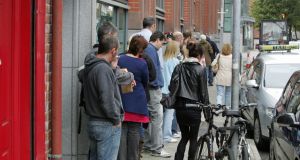 Unemployment fell again last month and the country’s services sector grew at its fastest rate in six years, underpinning hopes the economy may be finally turning a corner.

Optimism was further fuelled by a series of positive business surveys from Europe and China, pointing to an upswing in the global economy.

For the fourth month in a row, the number of people claiming unemployment benefit in the Republic fell.

The latest Live Register figures indicated the numbers signing on the dole dropped by 3,400 in August, giving rise to a standardised unemployment rate of 13.4 per cent, down from 13.5 per cent in July.

The figures suggested 45 per cent of those on the register have been out of work for at least one year, the lowest rate since mid-2009.

Minister for Social Protection Joan Burton said the figures provided concrete proof that the Government “was making progress in getting people back to work”.

However, the Irish National Organisation of the Unemployed claimed the numbers masked the high levels of emigration and the limited period people were able to sign on.

The Irish Small and Medium Enterprises Association (Isme) claimed the “dysfunctional and over generous social welfare system” was acting as a disincentive for employees to work, and that employers were unable to match “the over-generous State handouts”.

Separate figures from the Central Statistics Office on “job churning”, suggested the number of positions created during 2011 outpaced the number of job losses for the first time since 2007.

The positive employment data coincided with figures suggesting the country’s services sector – which accounts for about 70 per cent of the economy - grew at its fastest rate in six years last month.

The latest Investec Purchasing Managers’ Index (PMI) of services sector activity rose to 61.6 in August from 57.6 the previous month.

This was the highest reading recorded since February 2007, and comfortably above the all-important 50 mark, which denotes an expansion in activity.

“The principal cause of rising activity in August was the spell of unusually good weather in Ireland and the consequent boost to the tourism sector,” said Investec’s chief economist Philip O’Sullivan.

Investec’s sub-index for new business recorded it fastest rate of growth since March 2007, with respondents citing “increased new business from both domestic and export markets”.

New export orders expanded for a 25th successive month while companies also increased their staffing levels on the back of “greater workloads”.

At the same time, euro zone businesses had their best month in over two years in August as orders increased for the first time since mid-2011.

It was the highest headline figure since June 2011, albeit revised down a tad from an initial flash reading of 51.7.

The forward-looking new orders index rose to 51.0, the first time above the 50 mark dividing growth and contraction since July 2011, which will come as welcome news to European Central Bank policymakers meeting this week.

In Britain, a rush of new business last month drove the fastest growth in the services sector for more than six years.

The Markit/CIPS UK services purchasing managers index (PMI) rose to 60.5 in August from 60.2 in July, its highest level since December 2006, holding well above the 50 growth threshold for the eighth consecutive month.

Growth in China’s services sector hit a five-month high in August, providing more evidence that the world’s second-largest economy may have avoided a sharp slowdown.