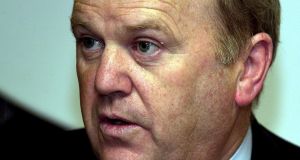 Ireland faces at least two more years of tax increases and spending cuts before an easing of austerity in 2016.

According to the first formal projections for government spending and tax revenues beyond 2015, a neutral budget in 2016 depends on recovery in the Irish and international economies, the successful implementation of austerity budgets every year up to 2015, and no large additional banking costs.

Also today, the Governor of the Central Bank, Prof Patrick Honohan, said he believed the banks would need further capitalisation before 2019, when new global rules on capital requirements for banks will come into effect. He did not give a figure for how much more capital he believed they would need.

If the budget in 2016 does not contain new taxes and spending cuts, it will be the first non-austerity budget since 2008.

Under the constitution, a general election must be held no later than the spring of 2016. It has been the long-held objective of the coalition to have completed the budget adjustments before the next election.

The budget projections are contained the Stability Pact Update, a three-year economic and budgetary forecast all EU member states must submit to the European Commission by the end of April each year. Along with a number of other governments, the Fine Gael-Labour coalition submitted its update last night just before the end-April deadline.

Speaking to the Oireachtas Committee on Finance, Public Expenditure and Reform, the Minister for Finance, Michael Noonan, refused to be drawn on the 2014 budget, which is to be finalised by October of this year.

He said that the new forecasts are underpinned by a “technical assumption” that the promissory note savings, secured in February, will be allocated to deficit reduction. Mr Noonan said that how the savings are used needed to be discussed with the EU-IMF troika. He added that his preference would be for increased investment in job creation.

In the first update of the Government’s economic and budgetary projections since Budget Day 2013 in December of last year, gross domestic product - the widest measure of economic activity - is forecast to expand by 1.3 per cent this year and 2.4 per cent in 2014. Both forecasts are in line with the average across a range of public and private organisations’ forecasts and are only marginally changed from December.

Mr Noonan stressed that the figure and all others contained in the document are not Government targets, but forecasts compiled by Department of Finance officials.