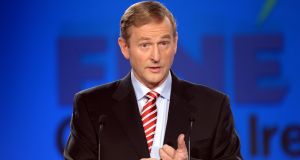 Taoiseach Enda Kenny said the EU meeting would give him a chance to brief his European counterparts on the situation in Ireland. Photograph: Alan Betson/Irish Times

The Government will consider “the best options” for the country to exit the bailout following discussions with its lending partners, Taoiseach Enda Kenny has said.

He was speaking at an event in Dublin this morning before flying to Brussels for a two-day summit with European leaders, the final leaders’ summit before Ireland’s scheduled bailout exit on December 15th.

Mr Kenny said the meeting would give him a chance to brief European leaders on the situation “as it now stands in Ireland. ”

Referring to Minister for Finance Michael Noonan’s ongoing discussions with EU and ECB leaders, Mr Kenny said: “The Government will consider what the best options are for exiting the bailout programme following these discussions.”

Most analysts expect Ireland to seek some form of precautionary credit when it returns to the capital markets, not least because rating agency Moody’s continues to apply a junk rating to Irish Government bonds.

There is speculation the Government may seek what’s known as an Enhanced Conditions Credit Line (ECCL) from the EU.

An ECCL is normally tied to certain corrective measures and has an initial duration of one year but is renewable twice, for six months each time.

The Government is understood to want to minimise the conditions associated with such aid.

Speaking at an event in the National Gallery in Dublin celebrating the 50th anniversary of charity group Chesire Ireland, Mr Kenny said he would again urge European leaders to fulfil their pledge to break the link between sovereign and bank debt.

“One of the failings or inadequacies of the European Council over the years has been an inability to actually complete programmes where decisions are made,” he said.

“In this regard, I refer to the decisions that were made last year in respect of banking union. For Ireland and for other countries, it is absolutely critical that we follow those things through to completion before moving on to any other agendas.”

Mr Kenny sent a letter to his European counterparts last night renewing his demand to but the link between bank and sovereign debt.

Though EU leaders agreed last year to use the European Stability Mechanism bailout fund to rescue failing banks on a case-by-case basis, there is still a dispute over whether this will entail retrospective aid to bailed-out Irish banks.