Taoiseach says Ireland does not do special deals on tax 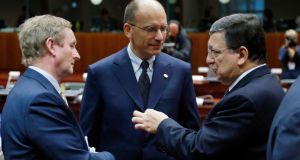 EU leaders pledged to intensify co-ordination of tax disclosure today in a bid to tackle aggressive tax planning, as Ireland’s corporate tax regime continued to come under the spotlight in the wake of a US senate report on Apple’s tax structures.

“Tax matters are always sensitive [....] but by nature tax evasion is something no country can solve on its own,” the head of the European Council said following the four-hour meeting of leaders.

While Luxembourg and Austria agreed to sign up to the Savings Tax Directive, a key piece of EU legislation which obliges countries to disclose information about savers for tax purposes, their support is only conditional on so-called ‘third countries’ such as Switzerland, Liechtenstein and Monaco, signing up to similar legislation.

While the EU-wide Savings Tax Directive was introduced in 2003, Austria and Luxembourg refused to sign up to the legislation.

Last week European finance ministers agreed a negotiating mandate to begin discussions with third countries on savings taxation, with Austria and Luxembourg agreeing in principle today to sign up to the sharing of data by year end, on condition that third countries also agree to the rules.

Meanwhile Taoiseach Enda Kenny defended Ireland’s corporate tax regime at the fringes of today’s summit, rejecting claims that computer giant Apple had negotiated a tax rate of 2 per cent with the Irish government.

“Our corporate tax rate is in statute, in law” he said. “If you look at the OECD criteria for tax havens, Ireland fits into none of those,” he said, adding that Ireland had been the fourth country to sign up to the American Foreign Account Tax Compliance Act (FATCA) .

“There’s been quite a lot of media comment about Ireland in the last few days. I’d like to repeat that Ireland’s corporate tax rate is statute-based, is very clear, is very transparent and we do not do special deals with any individual companies in regard to that tax rate.”

Mr Kenny also told reporters that Ireland had continued “and will continue” to compete for international business, and has had a stable corporate tax rate for many years.

However, he noted that tax was not the only reasons companies come to Ireland.

His comments came as a new report from Oxfam Ireland claimed that more than €700 billion owned by individuals internationally could be held in Irish financial institutions.

The report estimates that 5 per cent of the estimated €14.3 trillion held by individuals in 52 tax havens around the world resides in Irish accounts, equating to €707 billion.

According to Oxfam, its figures are based on analysis of data from the Bank of International Settlements, the International Monetary Fund and national authorities such as the Irish Central Bank.

The report also pointed to the Netherlands, Luxembourg , Cyprus, and the UK and its dependencies such as the Cayman Islands, as places that “could be assisting people in avoiding tax.”“

“This is about fairness and equality. Making sure individuals and companies pay their fair share would help eradicate the pervasive inequalities in society that mean one in eight people still go to bed hungry every night,” Oxfam Ireland chief executive Jim Clarken said.

“This hidden money could provide urgent finance for essential public services like health and education both at home and in poor countries.”

With European leaders not scheduled to return to the tax issue in upcoming summits, focus will now turn to tax developments at an OECD level as well as the upcoming G8 summit, with countries, including Britain calling for a “global standard” on tax disclosure.

Leaders also pledged to look at new measures to tackle VAT fraud, which have been proposed by the Irish presidency of the European Council, in a bid to address a problem that is believed to cost the EU billions of euro in lost revenue each year.