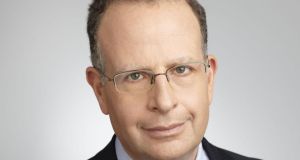 Edward Kleinbard, professor of law at the University of Southern California, addressed the House of Representatives’ Ways and Means Committee.

The use of offshore Irish companies by tech giant Apple to avoid billions of dollars in US taxes came under scrutiny again on Capitol Hill as a congressional panel examined America’s “broken” tax system.

Edward Kleinbard, professor of law at the University of Southern California, told the influential House of Representatives’ Ways and Means Committee that US multinationals like Apple had created “stateless income” by shifting profits to countries where they had to pay little or no taxes.

The use of cost-sharing agreements between Apple companies in Ireland and the US whereby it paid less than 2 per cent tax on income of $74 billion was a “core part of the problem” and was being used to “siphon money off between two legitimate claimants to nowhere”.

He described Apple’s Irish holding company, which warehoused profits made from international sales outside America, as a “meaningless operation”, saying it purported to take on risk when in fact there is no risk-sharing and no independent decision-making at the Irish subsidiary.

The congressional committee, which is also examining the international tax practices of Starbucks, Google and Amazon, is exploring ways to change US tax laws to stop US multinationals booking income for tax purposes in a jurisdiction where the economic activity does not occur.

One option being considered by the committee is a carrot-and-stick proposal where all foreign income, whether owned by a US parent company or foreign subsidiary, would be taxed at a rate of 15 per cent.

‘Trapped cash’
This is lower than the 35 per cent tax charged by the US on overseas profits – described as “trapped cash” by tax expert Paul Oosterhuis at yesterday’s hearing – being repatriated from abroad.

Prof Kleinbard called for a tax rate of 25 per cent on worldwide corporate income.

Mr Oosterhuis said this rate was too high and would affect the competitiveness of American companies.

A rate of 10-15 per cent would be better and companies should receive credits for taxes paid overseas.