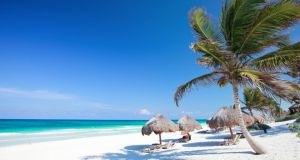 The Washington Senate committee’s hearings into Apple’s tax affairs last week heard that American multinationals might have up to $1.9 trillion lodged offshore in an effort to avoid US corporation tax.

Even a relatively perfunctory examination of records in the Companies Registration Office supports suspicions that a lot of this money might be in bank accounts under the control of Irish-incorporated companies.

With at least some elements of the US political establishment anxious to tax these accumulated earnings, the question that arises for Ireland is the extent to which any changes might affect a key element of our economy that provides well-paid work to more than 100,000 people and contributes hugely to the Irish corporation tax take.

A search of the Companies Office files for all directors of Irish companies with addresses in Bermuda or the Cayman Islands throws up a range of companies with familiar names, such as Abbott, Dell, Google, Microsoft, Pepsi-Cola, Sanyo, BMC Software, and Novell.


No employees
As is now well known, a very significant subsidiary in Apple’s global structure, Cork-based Apple Sales International, receives tens of billions in annual income from Apple sales around the world, but pays almost no tax here or anywhere else.

This is because of the way Ireland does not tax companies that are not managed and controlled here, irrespective of whether they are Irish or not, while the US does not tax non-US companies.

In this way the Apple company, by being incorporated here but having US-based directors and holding its board meetings there, has managed not to be resident for tax purposes anywhere.

As the panel below shows, there are numerous Irish-incorporated companies with substantial sums going through them that are not tax resident here but rather in places such as Bermuda and the Cayman Islands. Many, if not most of them, have no employees and receive their income by way of royalties from companies that are of greater substance and are also Irish.

Some of these latter companies, such as Google Ireland Ltd, have been targeted by politicians in the UK and France for the way they channel the profits from their business across Europe, and further afield, to the Irish operating or headquarter companies, where they are taxed at 12.5 per cent.

The interesting aspect of the emerging picture is how the non-resident companies may affect the more substantial, Irish-resident operations and how the apparently ever-growing role of Ireland in the affairs of many of the world’s largest companies will create serious pressures for the Irish foreign direct investment model.

One issue that appears to arise from the sort of scenarios outlined in the UK and the US over recent weeks, that can be seen from the panel below, is the capacity for the non-tax resident royalty companies to suck profits out of the operational companies, thereby reducing the overall amount of corporation tax paid.

The controversy over these so-called double-Irish arrangements is already such that at least some people involved in the FDI sector here, are willing to acknowledge there may be a need for change.

While the hearings in London and Washington may be feeding into political pressures to act on multinational taxation, the same hearings may well be increasing the pressure on tax professionals and finance directors to further reduce the tax bills of the corporations whose affairs they are involved with.

Whatever deal or understanding may have been reached two decades or more ago between Apple and the Irish authorities, and possibly with other multinationals with large presences her then, the cat appears to be out of the bag now and other corporations may well be asking why they can’t operate like Apple Sales International.

At earlier hearings in Washington last year, senior executives from Microsoft confirmed to the Senate Subcommittee on Permanent Investigations, that tax concerns play a major role in where a corporation decides to locate its subsidiaries. The more these hearings go on, the more the advantages of Ireland are being publicised.


More worrying
If, and it is a big if, the US decides to change its rules so that the passive income of US corporations, such as royalty payments, becomes immediately susceptible to US corporation tax, irrespective of whether it is repatriated or not, then this may well not have a serious impact on Ireland.

This is because such royalty-receiving companies, by their nature, have to have no management and control here in Ireland.

As the chief executive of the IDA, Barry O’Leary, has said, the general drift in international thinking appears to be towards greater alignment between operations of substance, and taxation.

Such a move could well benefit Ireland, which has a myriad substantial operations based here, alongside more brass-plate type concerns (albeit ones that often have the larger balance sheets).

Probably more worrying for Ireland is that any effort to draw a greater alignment between the sales and other activity located in any particular jurisdiction and an obligation to pay part of the tax on the associated profits into that jurisdiction’s coffers.

It is, of course, not just US multinationals who are driving down their effective tax rates through the use of Ireland and places such as the Cayman Islands or Bermuda – and Ireland is not the only part of Europe that is heavily involved in this trend – the Netherlands and the City of London deserve as much press coverage, if not more.

Overall, however, the continuing demands of governments for tax contributions to plug yawning deficits are likely to create an irresistible demand for a larger contribution from the most profitable corporations on the globe.