Ireland to defend ‘integrity’ of tax system in Apple appeal 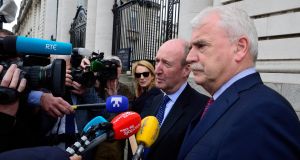 The Government’s appeal against the €13 billion Apple tax ruling must be lodged with the European Court by early November.

After three days of internal divisions between Fine Gael and Independent Alliance Ministers over Ireland’s response to the ruling, the Cabinet yesterday presented a united front with Fine Gael Ministers, in particular, setting out a robust defence of Ireland’s tax arrangements.

In the event, yesterday’s Cabinet meeting lasted only half an hour.

All of the outstanding issues had been resolved in advance of the meeting and there was unanimous backing for the memorandum from Minister for Finance Michael Noonan recommending an appeal.

It will be against the commission’s ruling that Apple’s tax arrangements in Ireland amounted to an illegal state aid.

The Government has two months and 10 days to lodge the appeal from the date of the ruling, which was last Tuesday.

The two Independent Alliance Ministers, Shane Ross and Finian McGrath, as well as another non-aligned Minister Katherine Zappone did wring some concessions from Fine Gael in return for their support.

These include an early recall of the Dáil next Wednesday, a review of the tax treatment of multinationals in Ireland, and strong moves towards tax justice and transparency – a key demand of Ms Zappone’s.

However, later yesterday, Mr Noonan said he would nominate the expert and he would also set out the terms of reference.

He emphasised to reporters that he would specifically exclude any consideration of the 12.5 per cent corporation tax rate in the terms.

At a media conference in Leinster House, after the decision, the Independent Alliance said it had been wholly united in its approach and there had been no divisions.

It said it had always stressed that it had wanted a fair system of taxation for multinationals.

Its leader Shane Ross emphasised the commitment to appoint an independent expert to review the corporate tax system in Ireland.

He dismissed suggestions his support would be conditional on the progress of a commitment for University Hospital Waterford, saying that was a separate matter.

“Now is not the time to bring down the Government, just before the budget,” he said.

Mr Ross said all parties were acting legally at the time Apple made its tax arrangements here.

“What they [Apple] were doing was making use of extraordinary loopholes that existed there,” he said, but added that the company should pay its fair share of tax.

The Dáil will reconvene at 10am on Wednesday to debate a motion on the Government decision.

The motion will argue it is necessary “to defend the integrity of our tax system, to provide tax certainty to business; and to challenge the encroachment of EU state aid rules into the sovereign Member State competence of taxation”.

Paul Murphy, of the Anti-Austerity Alliance - People Before Profit alliance, described the decision as “very definitely the last refuge of a scoundrel”.

Fianna Fáil and Labour have both said they will give conditional support to the appeal, on the basis of an appeal giving legal clarity.

Both said they would wait to see the grounds of the appeal.