European Court of Justice says Intel decision that led to €1.06bn fine should be re-examined 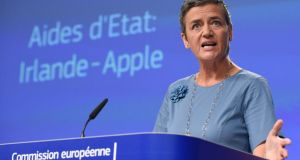 EU Competition Commissioner Margrethe Vestager: has she bitten off more than she can chew? Photograph: John Thys/AFP/Getty Images

Even as EU competition commissioner Margrethe Vestager was was putting a shot across the bows of a Government still reeling from the scale of the Apple tax ruling, a little heralded legal opinion in another part of the EU apparatus threatened this week to change things.

In an interview with Irish Times European Correspondent Suzanne Lynch, Vestager insisted the ruling that Apple must repay up to €13 billion (plus possible interest) to the Irish Revenue – which might then face competing claims from other EU states for portions of this money – was fact-based.

It has also emerged that the Irish authorities have submitted a list of 300 tax rulings to the commission as part of a broader enquiry in Brussels into tax rulings.

Down the road in Luxembourg, European Court of Justice advocate general Nils Wahl was throwing a spanner into the works.

He said a 2009 case against Intel, after an eight-year investigation – which led to a record €1.06 billion fine – should be re-examined in its entirety because a court erred in ruling against the company’s system of rebates for PC makers using its chips.

The ECJ judges are not obliged to follow an advocate’s opinion but more often than not they do.

Of particular interest to Apple and the Irish Government, which is planning ECJ appeals against Vestager’s record €13 billion ruling, is the advocate general’s criticism of the EU’s handling of evidence it gathered against Intel, saying the lower court was wrong to rule that regulators could add details of a meeting with a Dell executive long after the fact.

Failure to communicate a shift in the focus of the Apple probe and keeping both the company and the Government in the dark unfairly during the investigation are central to the likely appeal against the Vestager ruling on Apple.

In the wake of the AG’s opinion, lawyers in Brussels were suggesting, a confirmatory ruling by the full court could be among the most important decisions by an EU court in 25 years.

It remains to be seen if the commissioner has bitten off more than she can chew.