Prices in Dublin decline by nearly 2 per cent year on year, according to CSO 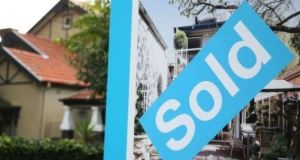 In September, there were 3,193 home sales filed with Revenue, a 22 per cent decline on the same month last year.

House prices nationally fell by almost 1 per cent in the 12 months to September as the Covid-19 crisis dampened activity in the market.

However, a pick-up in transactions in September was seen as evidence of recovery in the sector.

The latest Residential Property Price Index from the CSO shows residential property prices across the State fell by 0.8 per cent year on year in September.

The figures show prices in Dublin declined by an even bigger margin: 1.8 per cent in annual terms.

Along with a slowdown in price growth, the latest register points to a fall-off in transactions.

In September, there were 3,193 sales filed with Revenue, a 22 per cent decline on the same month last year. However, the September total was significantly up on the previous month, which several analysts said was evidence of the strong demand for property that still exists. The total value of transactions filed in September was €932 million.

In the capital, Fingal recorded price growth of 2.1 per cent but the Dublin city area saw a decline of 4.2 per cent.

Outside Dublin, the region with the largest increase was the midlands, where prices rose 4 per cent. At the other end of the scale, the mid-west region saw a 5.7 per cent decline.

“Housing transactions continue to recover in Ireland, while prices remain resilient, in spite of the dislocation brought about by Covid-19,” Goodbody analyst Dermot O’Leary said.

He also highlighted a new feature of the figures, which breaks out the performance of the new and existing homes markets, noting that price trends in the former tended to be less volatile than in the second-hand market.

The figures show that in the third quarter new homes’ prices rose by 1.7 per cent year on year, while second-hand property prices fell by 1.6 per cent. They also showed that over the 10-year time series, new home prices rose by 7 per cent, relative to a 22 per cent increase for the second-hand market.

KBC Bank Ireland’s chief economist Austin Hughes said: “September residential property price data confirm a trend towards softer property values of late but they also emphasise that the picture is one of slippage rather than a slump.”

“ Moreover, a notably smaller if still substantial drop in the number of transactions in September compared to a year earlier hints that the peak impact of the pandemic on property market activity may be behind us.”