Having bought bonds well below their originial value, Elliot Management stands to make a killing if Argentina pays the bonds in full 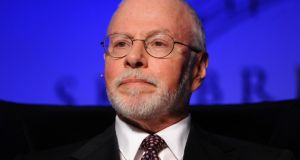 The hedge fund firm of billionaire Paul E Singer has about 300 employees, yet it has managed to force Argentina, a nation of 41 million people, into a position where it now has to contemplate surrender.

Argentina on Wednesday failed to make scheduled payments on its government bonds. The country has the money to pay the bonds. But a federal court in Manhattan has ruled that unless Argentina settles its debt dispute with Singer’s firm, Elliott Management, it is barred from paying its main bondholders.

After more than five hours of meetings on Wednesday, the sides failed to reach an agreement and the court-appointed mediator said that Argentina would “imminently be in default”. Because a $539 million interest payment was not made, ratings agency Standard & Poor’s said Argentina was in default on those bonds.

The government of Argentina now faces a stark choice: restart negotiations with investors it has repeatedly called “vultures”, who have for years refused to accept anything other than full repayment. Or remain ensnared in a default that could unsettle global markets.

After the talks collapsed, the economy minister of Argentina, Axel Kicillof, characterised the negotiations as extortion.

This campaign shows how deep-pocketed hedge funds can sometimes wield influence outside of markets they bet in.

While Singer’s firm has yet to collect any money from Argentina, some debt market experts say that the battle may already have shifted the balance of power toward creditors in the enormous debt markets that countries regularly tap to fund their deficits.

“We’ve had a lot of bombs being thrown around the world, and this is America throwing a bomb into the global economic system,” said Joseph E Stiglitz, the economist and professor at Columbia University. “We don’t know how big the explosion will be – and it’s not just about Argentina.”

As a hedge fund, Elliott’s pursuit of Argentina is motivated by a desire to make money. Having bought its Argentine bonds for well below their original value, the firm stands to make a killing if Argentina pays the bonds in full. Legal filings indicate that the face value of its Argentine government bonds was about $170 million, but the firm most likely acquired many of them for much less than that. Elliott and other investors are now seeking more than $1.5 billion, which includes years of unpaid interest.

Still, there is also something of a crusade about the battle that reveals the worldview of Singer (69). A Republican donor with libertarian leanings, he has spoken out when he thinks that governments and companies have damaged the rights of creditors.

“He believes deeply in the rule of law and that free markets and free societies depend on enforcing it,” said a fellow hedge fund manager.

That conviction has helped drive the creative legal assaults that have scored big financial gains for Elliott, which has nearly $25 billion of assets under management. Since the firm’s founding in 1977, it has on average posted a return of almost 14 per cent a year. At one point in the Argentina dispute, Elliott got a court in Ghana to seize an Argentine naval vessel docking in the country. The boat was later released.

The origins of the Argentine dispute trace back to 2001, when Argentina, overwhelmed by its sovereign debt load, decided to default on its obligations. The country later offered to exchange their defaulted securities for new “exchange bonds,” that were worth much less the original bonds. Most investors participated in these swaps, but some decided instead to fight the government for full repayment. These so-called holdouts included many individual investors as well as a unit of Elliott called NML Capital and other hedge funds including Aurelius Capital Management.

In 2012, Elliott achieved a stunning breakthrough in the US District Court in Manhattan. Judge Thomas P Griesa ruled that whenever Argentina paid the exchange bonds, it also had to pay the holdouts. Argentina could not ignore the ruling and pay the exchange bondholders because Griesa also ruled that any financial firm that distributed payments to the bondholders would be in contempt.

Argentina placed $539 million with the Bank of New York Mellon in June to pay its bondholders but the bank did not transfer it.

It is not clear whether Elliott expected Argentina to meet its demands by now. The firm managed to obtain payments from Peru and Congo-Brazzaville in somewhat similar cases.

Elliott’s supporters assert that the bets that rely on suing governments and state-owned entities make only a small proportion of its portfolio, and they add that the firm does not pursue countries that are clearly unable to pay their debts. Argentina, they say, is a particularly recalcitrant debtor that clearly has the wherewithal to pay the holdouts.

In Buenos Aires, some were resigned to the consequence.

“It doesn’t matter if it is a judge in New York City or a president in Argentina, I feel that neither cares about people, and about the future of this country,” said Sol Bodnar (31), a film producer. “It’s as if these people who have power were laughing in the face of us common citizens.”