MPs bicker through the night over deal to keep country afloat 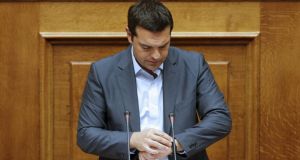 Ahead of an emergency session of euro zone finance ministers in Brussels, Greek MPs have overwhelmingly approved a third bailout deal for the country after an all-night vote that could see the leading Syriza party split over the controversial package.

After a tense debate in the 300-seat parliament, 222 MPs voted with the government, while 64 voted no, including MPs from the communist KKE and neo-Nazi Golden Dawn parties.

Just under 30 per cent of Syriza MPs decided not to support the government, with 31 voting No and eleven abstaining.

MPs began voting on the package at 9.30am after a rancorous, all-night debate that saw the divisions within the ruling leftwing Syriza party deepen.

Addressing MPs at the end of the seven-hour session, prime minister Alexis Tsipras described the €85 billion bailout agreement with creditors as a “necessary choice” for the nation.

“Faced with an ultimatum for Greece’s temporary exit from the euro, we assumed our responsibility towards the Greek people to stay alive and keep on fighting, rather than choose suicide. I don’t regret that I fought like no one before me in order to defend the rights of the Greek people, nor that I chose compromise over the heroic Dance of Zalongo,” he said, referring to a the mass suicide of women during a war with the Ottomans in 1803.

He added that his finance minister, Euclid Tsakalotos, faced a battle at a meeting of euro zone finance ministers later that afternoon to avert the threat of a bridge loan – which he called a return to a “crisis without end” – being offered to Greece instead of bailout aid.

The parliamentary session got underway with a considerable delay, largely attributed to the filibustering of outspoken speaker, Zoi Konstantopoulou, who had pushed for the debate to commence on Friday morning and end that afternoon.

During the debate, Ms Konstantopoulou announced that she no longer backed her party leader, who nominated her to the position in January.

“I am no longer going to support the prime minister,” she said, claiming party MPs who disagreed with the bailout of being “thrown to the dogs”.

While MPs began discussing the bill at committee state on Thursday, the leader of the rebels, former energy minister Panayiotis Lafazanis, issued a call for a nationwide, antimemorandum front.

“The fight against the new bailout starts today, by mobilising people in every corner of the country,” said a statement signed by eleven Syriza members, including Mr Lafazanis, who lost his cabinet seat last month after voting against the first bailout-related bill.

“The new memorandum completely reverses the mandate of the Greek people, who [in the referendum on] July 5th rejected the poverty and neocolonial dependency of the memorandums and neoliberal policies,” the statement added.

Mr Tsakalotos told MPs that if they failed to pass the legislation ahead of the Eurogroup meeting, Greece would be forced to take a bridge loan and the agreement would risk being rejected by other EU parliaments.

1 South Dublin Credit Union members urged to borrow more to ensure survival
2 Who are Ireland’s 17 billionaires?
3 Opioid executive admits to ‘no morals’ ahead of prison term
4 Are there annual limits on inheritances or gifts to a child?
5 My father in a nursing home wants to gift me his house
6 NI businesses fear burden of post-Brexit red tape on goods transport
7 From chips to €14bn in trade: Ireland and Italy’s enduring exchange
8 Fallon & Byrne founders McHugh and Byrne exit group
9 Budget 2020: New emissions tax on new cars and used imports
10 ‘If you don’t like challenges, you should not be in the airline business’
Real news has value SUBSCRIBE