Government’s gamble to ignore Troika is paying off 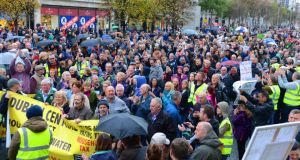 A protest against water charges in Dublin last month. Economist Jim Power warned on Tuesday that the only chance the current government has of getting back into power is another year of economic growth to facilitate a give away Budget next October. Photograph: Cyril Byrne / THE IRISH TIMES

The Government’s decision to ignore the advice of the Troika and the Fiscal Advisory Council in opting for a less punitive budgetary approach in Budget 2015, “seems to be paying off”, economist Jim Power said on Tuesday.

“This gamble was based on stronger economic indicators and it seems to be paying off, to date,” he said, noting that austerity has “passed its sell by date” in Ireland.

“Fiscal austerity as a creed has passed its sell by date in Ireland and elsewhere in Europe and austerity measures are now too politically risky for those in power,” Mr Power, chief economist with Friends First said on the publication of his latest Economic Outlook .

“The labour market is continuing to improve; construction and housing activity is strengthening, manufacturing output is strong and car sales are making a significant contribution to the recovery in retail sales,” he said.

However, he noted that discretionary spending and the personal sector remain weak and continue to pose a risk to recovery.

Mr Power said there are now “justifiable concerns” about price increases in the Dublin property market, noting that the Central Bank’s lending rules are both “prudent and sensible”.

While they might pose problems for first time buyers in particular, Mr Power said: “It is not the role of the Central Bank to worry about whether first–time buyers can get on the housing ladder or not. Its role is to control the risk in the mortgage market with the aim of bolstering the stability and resilience of the banking system. It failed to do this in the past and it is now moving to make sure the same mistakes are not made again. It is up to Government to decide if they want to and how they might help first-time buyers get on the ladder. Mandatory mortgage insurance provided by a third-party providers is an option that should be seriously considered.”

With regards to water charges, Mr Power said that the government parties have been “ very badly damaged”.

“While water charges themselves are tiny in the context of the massive fiscal adjustments that have occurred since 2008, they represent the straw that broke the camel’s back. If the opinion polls are to be believed the only hope the current Government has of getting back into power is that another year of economic recovery and another expansionary budget next October will convince the electorate that they are worth re-electing.”

1 Should AIB compensate me for upsetting letter on arrears?
2 Irish economy to grow by 3.4% this year, predicts EY
3 Poll on second election, concerns over Irish pension gap, and Ireland’s rich list
4 Don’t buy online DNA ancestry tests. You are the real product
5 Don’t die before you read this: what happens to your money if you die unexpectedly?
6 The Irish man making his mark on California’s cannabis industry
7 US threatens retaliation against EU over proposed carbon tax
8 How to … transfer your data to a new phone
9 Richie Boucher appointed as next chairman of CRH
10 North’s consumers will be ‘hardest hit’ if UK fails to secure EU deal
Real news has value SUBSCRIBE