Cliff Taylor, Managing Editor of The Irish Times, and Pat Leahy, Deputy Political Editor, react to the news that Apple have been ordered by the EU to pay €13bn in unpaid taxes to the Irish state. 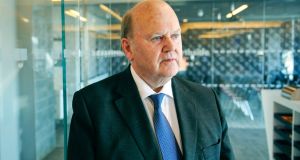 Minister for Finance Michael Noonan: Opposition TDs dispute his and the Department of Finance’s view that the billions in back taxes could not be spent on public services. Photograph: Aidan Crawley/Bloomberg

Independent Alliance Ministers were undecided last night on whether they would support the proposal from Minister for Finance Michael Noonan to appeal yesterday’s ruling from the European Commission which directed Apple to pay €13 billion in back taxes to the Irish State.

The Cabinet will meet this morning to discuss the ruling. Mr Noonan will seek formal approval for the decision to appeal the directive but Fine Gael Ministers have already said repeatedly that the decision will be appealed, a position also endorsed by the Taoiseach.

If the Independent Alliance Ministers do not agree to the appeal, it will place the future of the Coalition Government in immediate jeopardy, according to sources in Fine Gael.

Yesterday, the European Commission announced that Apple’s tax arrangements – which enabled it to channel profits earned in Europe and other markets outside the US through Ireland without paying tax on the bulk of them – constituted a form of illegal state aid to the firm. Consequently, the commission ruled, Apple must pay the State back taxes of €13 billion, plus interest – which by some estimates could add several billion euro.

The unexpectedly large sum calculated by the commission took many in political circles by surprise, including a number of the Independent Alliance members who had anticipated a sum of €6 billion-€7 billion following briefings from Mr Noonan and his officials on Monday.

It also precipitated a storm of criticism for Mr Noonan’s stated intention of appealing the ruling, with Sinn Féin and the People Before Profit-Anti Austerity Alliance group demanding that the State accept the money and begin to spend it. People Before Profit TD Richard Boyd Barrett accused the “entire political establishment” of having “colluded with Apple in an act of economic treason to rob the public of billions of desperately needed cash for public housing and other cash starved public services.”

Department of Finance officials confirmed that once collected from Apple in the coming months, the €13 billion sum, plus interest, will be lodged in an escrow account pending the outcome of the appeals process, which could take several years.

Department of Finance officials and Ministers said that, even if Ireland loses the appeal and is ultimately paid the money, it will be required by EU rules to use it to pay down the national debt, rather than invest it in public services and infrastructure. However, this is disputed by Opposition TDs.

Apple issued a statement rejecting the findings and saying the company now found itself required to pay tax to a government which says no tax is owed.

The Government immediately began an aggressive campaign against the ruling. According to a briefing document obtained by The Irish Times, the Government believes it would be “irresponsible and extremely short-sighted to consider the European Commission decision as a windfall for the State.”

The Government also accused the commission of encroaching into an area – taxation – where it has no powers.

However, announcing the ruling in Brussels, European commissioner for competition Margrette Vestager said that EU state aid rules applied to taxation as well as other areas of activity and were in place to protect EU taxpayers.

“It has no employees, no premises and no real activities,” she said.

EU politicians in Brussels widely welcomed the European Commission’s decision. However, the reaction in the US was predictably more hostile, with White House spokesman Josh Learner confirming that the Obama administration had been contacted by Apple executives in the wake of the Brussels announcement.

The White House expressed concern too about the commission’s ruling saying that American taxpayers will ultimately foot the €13 billion tax bill imposed by the EU on Apple.