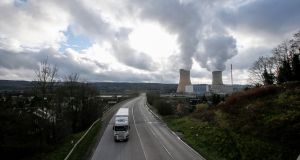 epa05089784 A general view of Thiange nuclear power plant near Huy, southern Belgium, 06 January 2016. Since March 2014, today will be the first day that all 7 Belgian nuclear reactors will be all working at the same time. Situated some 60 kilometers from the border with Germany, after many failures in recent years, the Belgian nuclear industry has come under criticism by the German Environment Ministry. EPA/OLIVIER HOSLET

Growth in German imports outstripped exports in November and industrial output unexpectedly fell, suggesting Europe’s largest economy may have slowed at the end of 2015.

The data highlighted the shift in Germany’s economy away from a reliance on exports and towards more consumer-driven growth. “Industrial production is floppy - there currently is no power in the sector,” said Bankhaus Lampe, chief economist Alexander Krueger, adding that slowing global growth was the main reason for the sluggish performance.

“The German growth story is basically a consumption story,” Lampe said. Seasonally adjusted exports inched up 0.4 per cent after falling 1.3 per cent in October. Imports rose 1.6 per cent, narrowing the trade surplus to €19.7 billion , data from the Federal Statistics Office showed.

Industrial output fell by 0.3 per cent as manufacturing activity dropped, but construction pushed up, separate data from the economy ministry showed. The headline figure came in weaker than a consensus forecast for a 0.5 per cent increase.

The economy ministry said the economic slowdown in emerging markets was the main reason why industrial companies held off some production in the fourth quarter of 2015.

However, a recent rise in industrial orders and a revival in construction pointed to a recovery in the sector in the coming months, the ministry added. Record-low borrowing costs, rising demand for property and higher state spending to house an unprecedented influx of refugees have led to a construction boom in Germany.

In 2015, the authorities registered over 1 million new arrivals. Economic data on Thursday also showed that healthy domestic demand fuelled a bigger-than-expected rise in German industrial orders in November. As demand from China, Russia and other emerging markets wanes, the government expects imports to rise at a faster rate than exports throughout 2016.

This means net foreign trade is likely to hinder growth, a remarkable development for an economy that for decades has relied on exports, led by its engineering and auto sectors. Instead, strong private consumption and higher state spending on refugees are expected to drive growth.

The government predicting gross domestic product will expand by 1.7 per cent in 2015 and 1.8 per cent in 2016. The Federal Statistics Office will publish its flash reading for 2015 GDP growth on January 14th.

Finance minister Wolfgang Schaeuble has signalled readiness to loosen his austerity policy, but he still aims to balance the federal budget in 2016, despite the cost of accommodating and integrating hundreds of thousands of migrants. Analysts say that might be difficult if the number of refugees does not decrease.